Session 14: Rye for the first time - a good location

I need to visit Sorrento on the Mornington Penninsula to help my brother Donald move some furniture, so I took my kite along. The Bay winds website showed a good Northerly, which suits Rye. I got there at 11:30, three others were out a and having a good time in 18 knot winds.

It is a nice site. Not too crowded (at this time of year anyway) and no obstacles to contend with.

Launching was easy with some help. My first run was not too good, I basically tea bagged.

Then I had a couple of great fast runs out and back up wind. Not too much chop either.

A light plane flew right over me - so low I wondered whether I should drop my kite!

The weather was fine and sunny. The water was cool, but my 3mm steamer wetsuit kept me quite warm.

The wind was a bit gusty, with holes in it. It dropped to 15 knots and changed from a Northerly (one of the few sites in Melbourne for this direction) to a North Westerly. A Westerly here would be off shore.

I played around with my kites "Centreline Adjustment Strap" (CAS). The Cabrina manual says the black ball is for depower and the red one for power, but mine is the other way around - presumably an assembly mistake. Pulling the blackball takes tension off the front lines and hence puts more pull on the back lines - which generates more power. It is a fiddly adjustment to make. I will check out the new Cabrinha Crossbow bar when they arrive in Australia, and maybe get one with a 7m kite.

Posted by Peter Campbell at 6:41 pm No comments:

Lena, Chloe and I went to Port Douglas in July for a holiday and to visit our friends Doug and Wendy who now live and work there. Doug took the kitesurfing shots.

I am glad I took my kitesurfing gear - the kitesurfing was sensational. The south end of 4 Mile Beach is the place to go, at Helmet St. There is a small coconut palm shelter where Brett Wright operates the Windswell Kite Surfing School. Brett was a great source of local information. 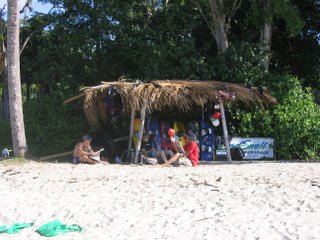 The beach is wide and good for launching. There is a reef just to the South which protects the water from chop. A Southerly was blowing at 15-20 knots - the Winter trade winds. I wore my 1mm wetsuit as it was overcast and not very warm. On the tack out (to my right) I was having some trouble generating enough power - the board would stall. Coming back in (to my left), I was going really well with heaps of speed.

I went out and back about 4 to 5 times, then walked back along the beach. Eventually, I got going better to the right as I stopped the kite going to the edge of the wind window by not oversheeting the control bar. 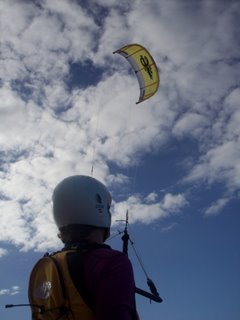 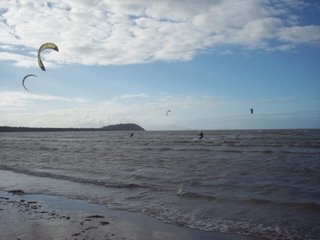 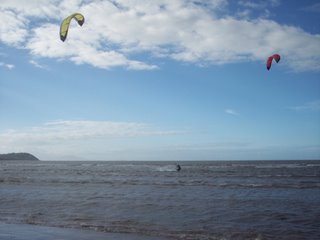 Great to be kitesurfing again. It has been too long between outings.
Posted by Peter Campbell at 10:43 pm No comments: