Jelly fish in Port Phillip Bay and a Pelican

I got some close up photos of the Blue Blubber jellyfish that we see in Port Phillip Bay while kitesurfing and swimming.  While they are not classified as poisonous, they can apparently cause an itchy rash.  If you come in contact with these the treatment is to apply vinegar or Stingose then wash it with salt water (not fresh water).

The other jellyfish found in the Bay are the Lion's Mane (treat as for the Blue Blubber), Southern Tailed and Moon. 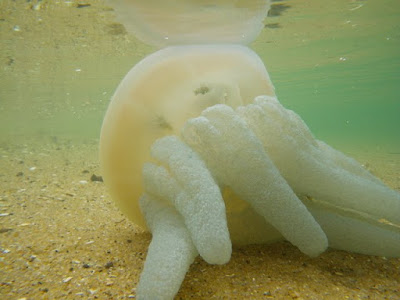 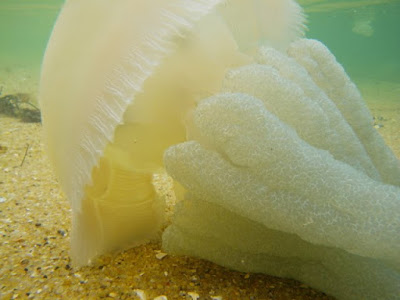 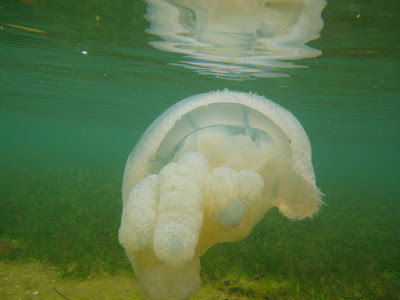 And here is a Pelican taking off 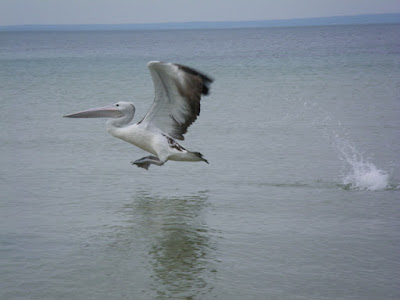 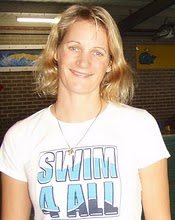 After much preparation and training, Natalie departed from Stanley in North West Tasmania at 6:30am and kitesurfed solo and non-stop all the way across Bass Straight, landing at Venus Bay in Victoria at about 4:15pm.

Natalie broke the previous record for kitesurfing across Bass Strait, set by James Weight and Ben Morrison Jack in late 2009, by 2 hours completing the trip in around 9 hours 30 minutes.

Natalie is also the first female and solo kitesurfer to make the crossing.  She was accompanied by a support boat for the trip. 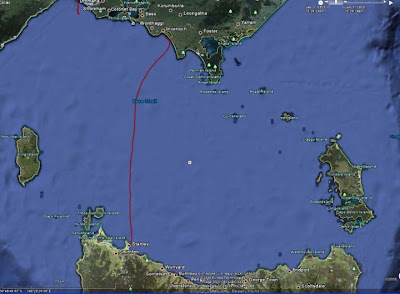 Natalie's track log; note detour when she sights land (Natalie Clarke)
Natalie made the crossing to raise funds for the Swim 4 All Foundation who are still accepting donations. 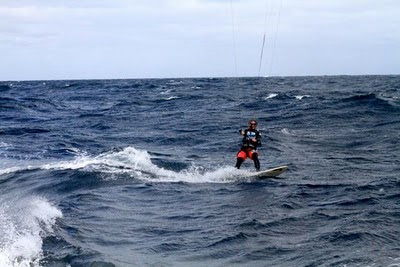 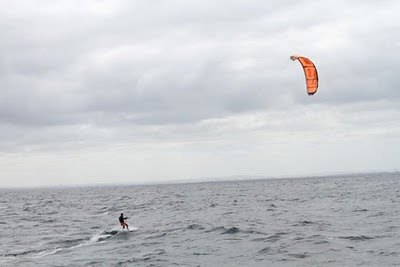 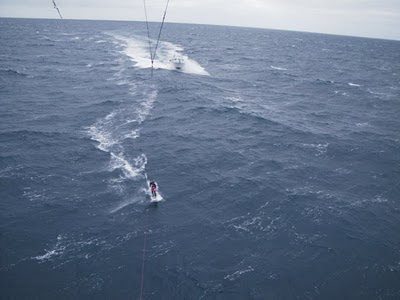 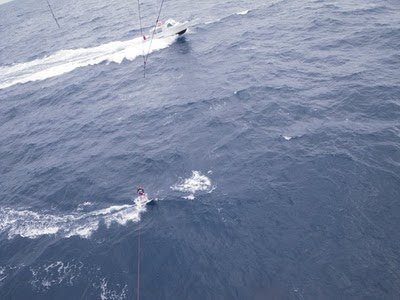 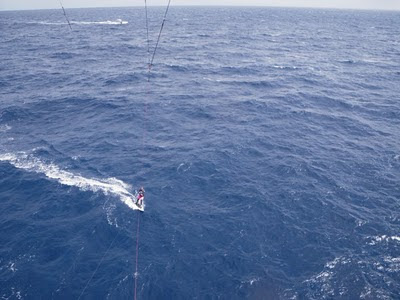 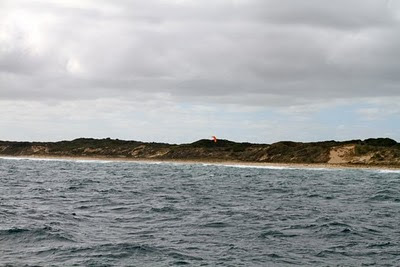 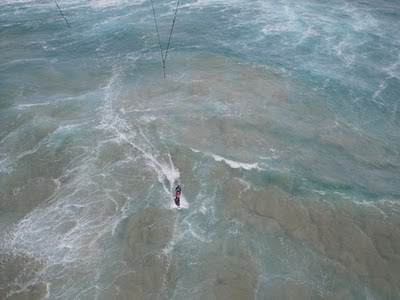 Into the surf at Venus Bay (Photo: Natalie Clarke) 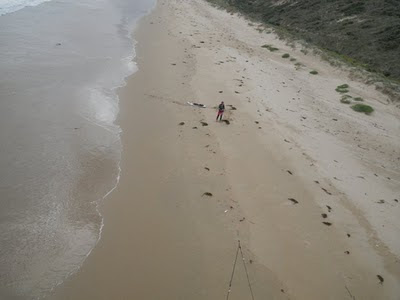 Arrived: on the beach at Venus Bay  (Photo: Natalie Clarke)

Hampton in an onshore Westerley


Some frontal weather patterns brought strong westerly winds this morning.  By afternoon they had moderated to around 20 knots so Stuart and I headed down to Hampton.

We initially planned to do a downwinder from Middle Brighton to St Kilda and back, but the wind dropped just as we got on the water.  Stuart kited back to Hampton while I packed away my 10m kite and drove the short distance back to Hampton.

I took the Switchblade 14 out and had a ball. Njord (the Norse wind god) smiled and provided some good wind and a moderate swell.  The westerly wind was blowing right in towards the harbour entrance so I was able to crank up some good speed on the flatter water.

I landed a few good jumps too in either direction, but didn't attempt anything more ambitious.  Easing back into it.

Ivan was kitesurfing the shorebreak along with about 8 others.  It got a bit crowded in close at times.

I took out the GPS, kite mounted camera and helmet cam.

Here is the video

And here are the photos 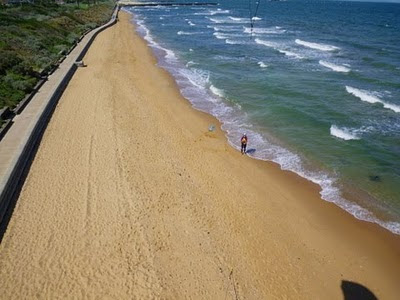 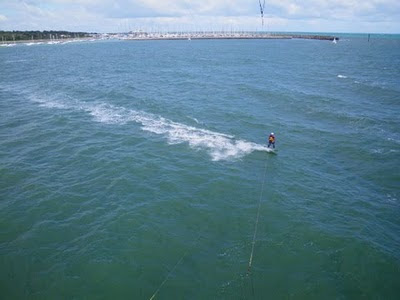 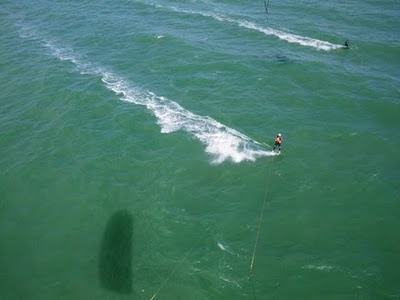 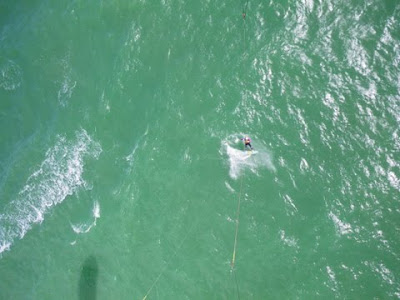 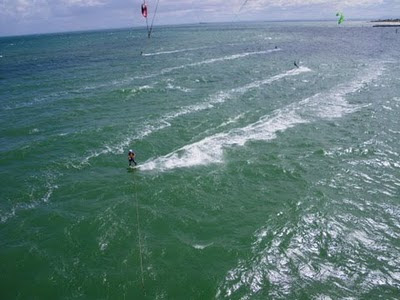 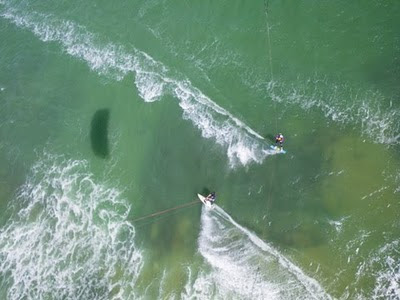 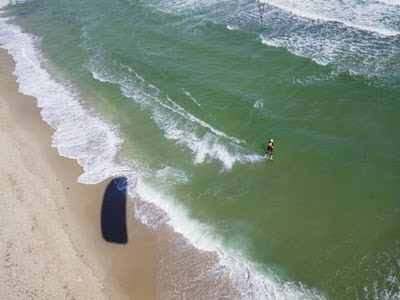 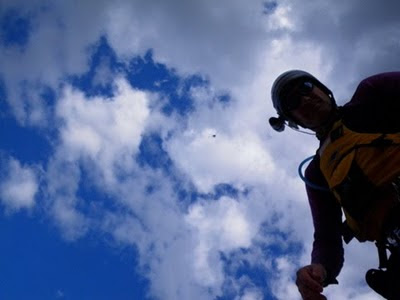 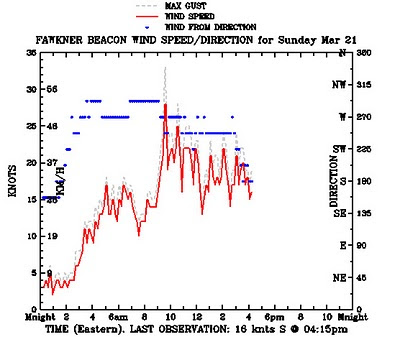 Links
Posted by Peter Campbell at 4:41 pm No comments: 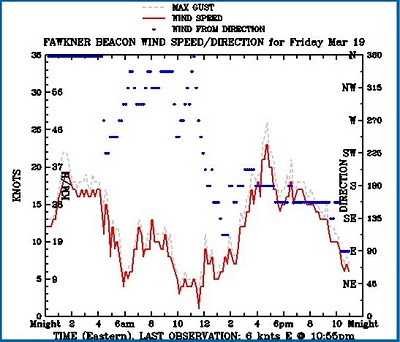 An evening kite at Port Melbourne

I got the all clear from the very efficient Eye and Ear Hospital for my ear on Monday.  My eardrum has regrown and kitesurfing is OK, at last.  The doctor said earplugs would prevent the ear drum rupturing, so wearing them is a good idea.

The challenge is to get earplugs that stay in place.

I headed to Port Melbourne after work, arriving to see a good sea breeze coming in.  The Spirit of Tasmania was berthed at the pier, loading passengers.

I took out the 10m kite so I wouldn't be overpowered.  Stuart was out already having a ball.  It was fantastic just to get in the water again.  I was up and going without any hassles.  However, the wind dropped so I had the fly the 10m kite hard to get enough power.

The waves were rolling in too.  I got some good runs in, just enjoying being there.  I did some kiteloops on the beach after I stopped. 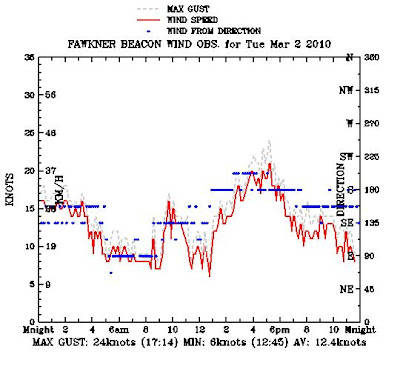 Posted by Peter Campbell at 6:42 pm No comments: