Altona buzzing in a good easterly - at last

Session 46
At last, some great kiting in a strong easterly at Altona. Stuart and I headed down during afternoon, getting on the water at about 2pm. The wind was consistent and cool. Altona takes the easterly well.

There were a lot of kites on the water and on the beach when we arrived. The wind was coming it at about 15 knots so I pumped up the 14m Switchblade. Stuart provided the following good tip for rigging up the IDS bar:

TIP: Attach the safety leash to the ring on the depower line where it connects to the chicken loop, rather than the main assembly. This way, if you pull the main safety and the velcro fitting that holds the depower line gives way (as Stuart's did recently at Sandy Point), then you are still attached to the kite.

No shortage of power as I cruised out in the small surf.

I did some amazing long runs up to the beach heading west. The small surf provided good jumping and coming closer to shore there was some great flat water behind the sandbanks where fast carving was easy. Some very shallow sections loom up occasionally though so you have to pay attention and flatten the board out if when it gets too shallow. Hitting a sandbank at 30km would not be much fun.

One young kiter did a very impressive jump with some flips and a handle pass then landed on his chest on a shallow sandbank. I asked him if he was OK as I went past. He said he was, but was lucky not to be injured. Jumping in shallow water is not a good idea.

Enjoy the kitecam footage I took

Here is the wind map. And the location map (approximate, no GPS today) 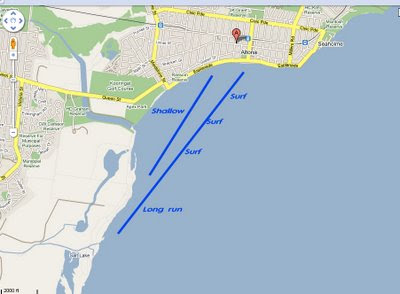 When April came this year, someone high above flicked off the wind switch. The sea breezes vanish and are replaced with erratic northerlies, the very occasional strong westerly, errating north westerlies and the odd easterly.

Rather frustrating for us kitesurfers. I need to get out!

Today I went down to Rye hoping that the forecast 20knot north easterly would be still blowing, but on arrival things were rather quiet. One guys had his kite up (just) but was not going anywhere while another watched with his kite on the beach.

The wind chart showed some reasonable wind in the morning though - so those who got there in time for it may have been rewarded.

The winter winds are fickle, infrequent and transient. My friend Stuart had a good day last Saturday off Hampton, but I was in Castlemaine of the day.

My solution is to keep on watching Baywinds and Seabreeze, and I have booked a ticket to Port Douglas for end July to catch some trade winds actions, and maybe even kite out to the Low Isles and back. Let me know if you will be up there too. We could arrange a downwinder from Ellis Beach with Brett from Windswell, and maybe a kiting trip or two to the Outer Reef.
Posted by Peter Campbell at 4:44 pm No comments: