A cross wind tour to Fawkner Beacon across the shipping channell

I was feeling adventurous today, so when a reasonable South Easterly arrived late in the afternoon I headed for Hampton in lieu of bike racing at Sandown (don't tell my racing buddies!). It was a lovely sunny afternoon and the wind seemed stronger than the 15 knots indicated at Fawkner Beacon.

I rigged the 14m Switchblade, donned my impact vest & GPS caddy and took off heading towards Fawkner Beacon in the far distance to see if I could get there. The swell was fairly small so I was able to make reasonable progress a little upwind.

My right arm soon felt a little tired again, so I held the power in the bar in the middle with my left hand and used the right to adjust the kite up and down when required. I also varied my stance by leaning right back, extending my arms and varying the bend in my knees and the power in my legs.

I stayed on the left tack marvelling at the distance covered and was again struck by a "wilderness experience" far out in the Bay with nobody else around, apart from one large yacht that sailed by close early on.

Eventually I came to a large channel bouy, then a two wooden channel marker poles. I cross the channel to reach another buoy on the other side and slowed down to appreciate the view. The bayside suburbs were spread out in the distance, the Dandenongs clearly visible out East, and the city skyline to the North. Cool, very cool.

I turned and got a good look at the Fawkner beacon not far to the South - about 200m away. It has solar panels on it, and is the data source for the wind charts I post on this blog. There is some meteo gear on it too - it is essentially a pole festooned with equipment.

It would have been a very long way to swim in so I headed straight back to Hampton, surfing down and around the small waves. For a while I was headed upwind slightly to the Sandringham Marina bout harbour and club house, but about two thirds of the long tack in the wind dropped a little so I headed towards the beach. Track log showing context is below. 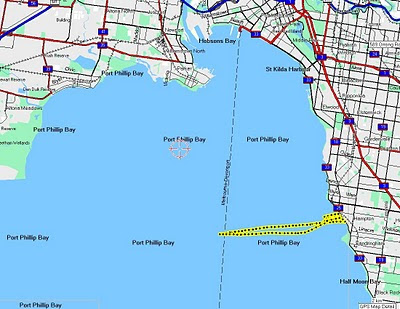 Zooming you can see the approximate location of Fawkner beacon, the shipping channel is clearly marked on the map. There were no big ships about when I was out there. 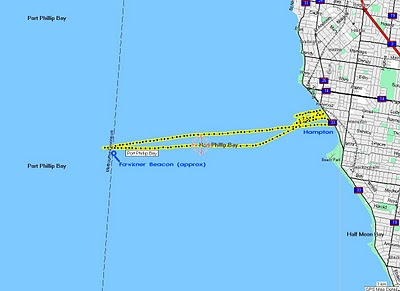 There were a few other kites about close to shore. I zoomed straight in to the beach next to the first groyne, pleased as punch to have made it. I then did a few tacks out and back until I was able to reach the main beach, by which time the wind had dropped further so I landed the kite and had a chat with Hamish on the beach.

It seems I was lucky to make it back in with no dramas as the wind dropped right off by about 7:30. (graph below). It is really good to mix up the kiting with some tours and adventures. 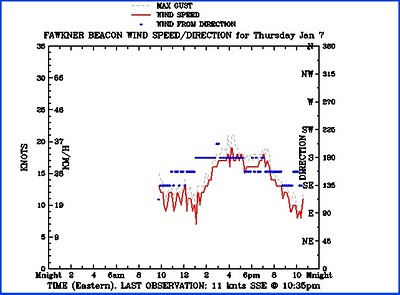 Getting ready for the big Bay crossing . . .
Posted by Peter Campbell at 10:46 pm

Very impressive! Lucky you made it out and back without any dramas.

Personal locator beacons (PLBs) send out a powerful one-way, one-time emergency distress signal that can be pinpointed to anywhere in the world. Once the signal is initiated, there is no turning back - help is coming whether you still need it or not.
Bluetooth beacon