I arrived early at Hampton at about 8:45 and dodged the cyclists on Beach Road to check out the beach.  Stuart was already rigging up and headed out in about 15 knots.  The wind looked a bit sketchy and I had missed my morning coffee so I was feeling a bit sluggish.  The wind picked up a bit though so I scooted back to my car parked up a side street near Hampton Beach (parking is prohibited from 6-10am).

It was great to be on the water again with some wind.  The wreck is now gone from the water which is nice.  I headed across to the breakwall and back for a couple of runs, working the kite to just stay upwind. Stuart came in and headed home early.

I stayed kiting to maximise my time on the water.  Just when I thought the wind was going to drop right out, whoosh - in came 20+ knots.  I even de-powered my Noise 12 for a while and did some good jumps.  By this time I was the only one on the water which was nice.

With more wind I was able to go upwind past the Sandringham marina rock wall for a view up to Black Rock, then all the back to Middle Brighton for some small waves.  There was some nasty reef popping up close to shore there though.

Having worked a good distance upwind, I then did some toe-side riding and powered "slalom turns" from heelside to toe-side and back again.  It was nice to get out of the "heel-side rut" for a while.

Jump transitions are still eluding me though.  I get some air, but when I try to send the kite in the new direction I just tea-bag under it.  I need to fly it more aggressively, but I am not sure where.  Perhaps into a kite loop or a down loop?  I have looked at a few videos but can't quite figure this out.  Its tricky.

I came right into near the marina then took a spill and lost my board.  There was not quite enough wind to body drag back to it.  I got very close so I put the kite down, swam a few strokes, grabbed it, then relaunched the kite. There was not enough wind to get back out though so I came into shore and landed the kite a bit awkwardly when the wind dropped right out.

It was a really good session .  Distance, speed, some jumps and nice wind.

I tried some new "wetsuit gloves" made for canoeing too.  The worked well and kept my hands warm.  They have a bit of a curve in the fingers so you don't have to fight the neoprene to hang on to the bar.

I had a nice toasted sandwich and coffee in the nearby Biskit cafe - which I can recommend for the food, coffee and bayside view.  I spoke to a guy in a wetsuit - who turned out to be a diver doing some rescue diver training with a group just off Middle Brighton beach.  He said there was not much on the bottom, but there are a lot of sea urchins 30m out and deeper.  Yikes!  So be careful at Hampton and Brighton.

Ben Wilson recently rode an 11m wave at Cloudbreak, Fiji.  This is an amazing achievement.  Hats off to Ben!

Here is some video footage (its also a Jeep ad).

And two pictures worth a thousand words from Ben: 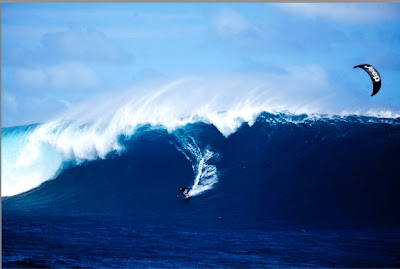 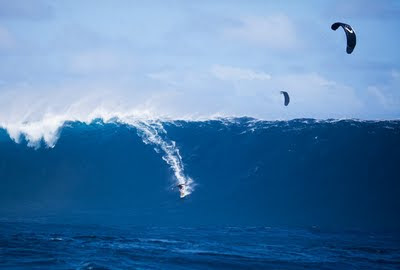 Stuart and I arrived at Brighton at about 9:00. The northerly forecast was blowing so we headed out with haste.   I was testing out my "line ordering device" for the first time (more on this later).  Laying out the lines was much easier but I did get one outside line twisted to I had to re-rig it.

There was a gale warning for the day, but the peak wind was forecast for around noon, so we elected to go out earlier and avoid the peaks.

Glorious sunshine and a lovely day.  There was a climate-change rally on at 11am in the city, so the choice was "save the planet" or "be a funhog".  I was hoping to do both, but in the end I missed the rally.

Just off shore the wind picked up and we got in a few good runs, but then it backed off a little.  Not wanting to get stranded 500+m offshore I headed in, doing a few kiteloops close to shore to get in.  I landed the kite near the bathing boxes, the walked back to the launch site, waiting for the wind to improve.

It did.  A honking 25 knots sprang up, gusting to 30.  I was well powered on the 10m kite and getting some good speed.   I did a few nice jumps, but am still struggling with doing a jump transition (turning).  My homework is to learn the theory on what to do with the kite to get this sorted.  I think I need to fly it more aggressively in the new direction (of the turn).

I am getting a bit rusty riding toeside too.  More practice is needed.  The desire to avoid crashing at Brighton in a northerly is strong, so I find it limits my appetite for trying new tricks.

I did some very quick runs (no GPS though) and landed quite a few nice jumps.  There were a couple of other kiters out initially.  More arrived later.

Coming in, I was nice and warm but my hands were a bit chilled.  Stuart and I were on the beach with our kites up. I signalled to another kiter to land mine.  But when I brought it down, he walked past it towards Stuart's.  The he headed back to grab mine but a gust jetted it forward. I left it on the sand but before he got to it it relauched and zinged across he wind window.  Stuart kept his how then I jumped across his lines and all was good.

Walking back, someone's board bag was drifting along in the water, having been blown off the beach.  I headed down and retrieved it then walked it back to where the kites were.  The owner was trotting along looking for it and was happy to have it back.

In summary, great kitesurfing but quite tricky conditions ranging from not enough wind to almost too much and some quite big gusts. 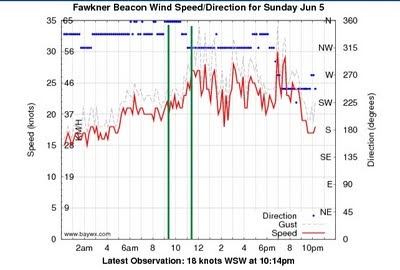 Posted by Peter Campbell at 10:53 pm No comments: