This is some the equipment I am using or have used.

Kites
The kites I have owned from newest to oldest are:

Boards
Tip: I recommend you write your name and phone number on your board. If you lose it in the event in an out-to-sea epic and it will probably get washed, found and returned to you. Another kiter said his was returned after he lost it in Winter once. 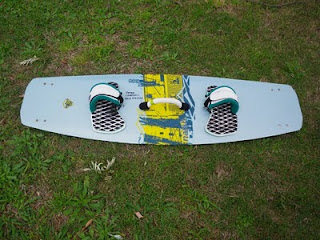 My original board was a Cabrinha 155cm. I cut out additional toe grooves in both footpads (on the right of the picture) so I can get a better grip on the board to stop my foot "shaking out" of the straps at speed. This works well, but is less effective with the surf socks on. They tend to jam a bit tighter under the straps and also have a grip surface. 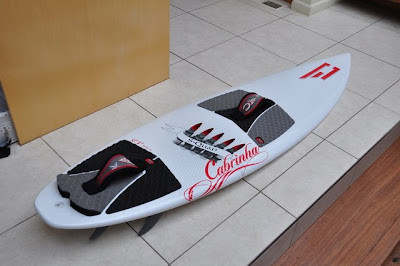 My latest acquisition is a Cabrinha S-Quad 6'1" (2009 model) directional board.  I am keen to try out a more  conventional surfboard shape and build some skills for going out in bigger surf.  This board has heaps of flotation and goes upwind really well.  It turns well too.  You can use it as regular surfboard.  I fitted the front foot pads and both foot straps.  I might lose the footstraps as my skill level improves. 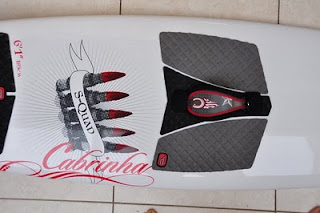 I am also now using an Airush Sector 60 for light wind days, downwinders and speed runs. This is the Dakine seat harness I am using, with an additional donkey dick on the bar (which I don't use now). I attach the safety leash below the bar so if I pull the safety the kite goes free. There is a pocket for a safety knife for cutting the kite lines in an emergency on the back of the harness. This shows the leg loops of the seat harness - very handy for stopping the harness climbing around your ribs when the kite is above you while learning. The safety knife is in the middle.

I have worn these "surf socks". They do reduce the feel of the board a bit, but they were great to have on when I got washed up into the rockwall and reef after not being able to relaunch my kite. They also provide protection from glass and other sharp items. This is not a major problem at Hampton Beach, but people have got some nasty cuts at St Kilda. I wear a 1mm steamer which I bought a few years ago for diving in the tropics. I find I don't get too hot and it keeps the sun off. So far, I haven't got too cold either, but I don't think it would be warm enough for winter.   I notice many people kite in boardshorts and rash vests, but I like having the thin layer of neoprene for protection.

I have taken out this Garmin Forerunner 101 GPS (minus the wrist strap) in the waterproof pouch. It is interesting to get the speed readout and track log. The unit got water in the battery compartment when I wore it on my wrist, so I now keep it in the pouch in the front pocket of my vest. 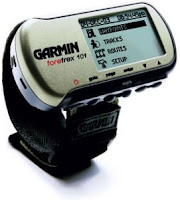 I wear a Gath helmet over the top of Ocean eyewear polarised sunglasses, which also have a firm retaining strap. The helmet stops the glasses coming off. I notice most people don't use a helmet, but I think the additional safety is good, especially while learning.  The glasses are excellent for reducing glare and stopping spray getting in your eyes.


Tip: Most fatalities in kitesurfing result from head injuries, so a helmet protects against this. So far (touch wood) I only smacked my head hard against the water which burst my eardrum - while wearing the helmet. This is a bouyancy vest I bought from a caneoing shop. It has a pocket on the front that I put my keys and GPS in. The padding provides some additional protection and it obviously means I float better. I plan to take out a slim waterproof camera soon in the front pocket too, or perhaps strapped to my wrist. I am using this impact vest for protection while jumping. It has good protection on the front, back and sides and is less bulky than the canoeing PFD vest that I used a lot when learning, and for downwinders. 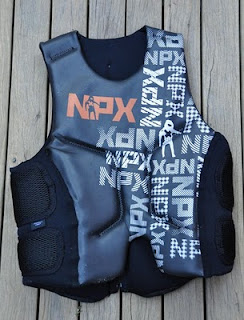 Note: The vest contains a specific warning that it is not an EN393 Bouyancy Device, and that it is not a life jacket. It is not approved by the U.S. Coast Guard of the Canadian Department of Transport or any other agency.   It is designed for tournament water skiers who find PFD jackets too bulky.

I also tried out a "rescue cord" device I rigged. It's venetian blind cord tied to a ring on the harness with a small carabiner on the other end. I tucked it in a neoprene pocket secured on the webbing that attaches the spreader bar. The idea is to use the cord to secure an errant board and tow it, rather than try and scoop it up or do a water launch holding the board, which I have found to be extremely difficult.

Extreme caution must be exercised with a second board in two to prevent it being whip lashed into you if the kite gives you a good yank (the reason why board leashes are strongly discouraged).

It was not a great success as the zip holding the cord worked its way open and the cord then dangled behind trailing in my wake until I stowed it away again.