A roaring westerly at Inverloch

Session 61, Tuesday 3 November 2009
Kite: Crossbow 7m
Location: Inverloch, Pensioners Point.
Wind: 30+ knots W
Duration: 1 hours 9:00 to 10:00
The forecast was for good wind today, and it was blowing in the morning. Stuart, Tarren and I went down to Pensioners Point in Anderson Inlet and checked out the surf beach too. We decided to give Pensioners a try as there were more options there.
Rigging up, the wind was coming from the west (off the land) and swirling about dramatically. It was also gusting up to over 30 knots at times.
I decided to give the Crossbow 7m a go due to the high wind speed. Stuart and Tarren looked on. The channel was not flowing very quickly. There was more than enough wind to power the 7m kite. I did several runs to a sandbar across the channel and back, managing to stay a little upwind. I was very wary of crashing the kite as once over the other side, it would be very difficult to get back.
The wind gusts were dramatic, but the superb de-power of the Crossbow enabled me to handle them.
Then the wind dropped, so I did some runs downwind across the channel up into the inlet. I passed the jetty and was over the other side, sizing up a run back to the kite beach when my kite inverted on a turn and crashed. I think there was a hole in the wind right when I was turning the kite which contributed to the problem.
The kite crashed and flopped like a jellyfish, with me drifting towards a large sandbar in the middle of the inlet. I kept reefing in the lines and eventually relaunched it with the front and rear lines crossed once. I walked along the sandbar then kited back to the beach on the town side, relieved that a major epic was avoided.
Stuart and Tarren arrived in the car, with the bad news that my kite bag had disappeared from the launch site, presumable blown into the inlet. This was a problem as it had my car keys in it. Tip for the day - always weigh down gear with a lot of sand.
Then a huge stroke of luck. A French kiter came up with the bag, saying a windsurfer had found it floating nearby in the inlet, about 2km from our launch site. Amazingly, the keys were not wet.
Stuart then had a go of the 7m kite, followed by Tarren. Both enjoyed the session but remarked on how variable the wind was. At least we got some use from the 7m kite, which most of the time sits in my "quiver" idle. There were about another 6 kiters out at this time, going right across the inlet, mostly on 9m kites. The wind had backed off a little in strength but was still very gusty.
We decided a break for lunch was in order so we returned to the house.
Here is the wind chart for South Channel to illustrate how gusty the wind was there. 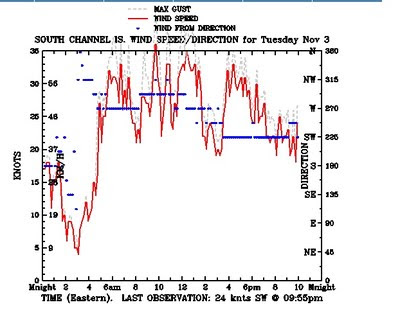 Posted by Peter Campbell at 6:48 pm