Good wind in winter at St Kilda - at last

I had coffee with Brendan, an old friend, at the St Kilda cafe overlooking the beach.  He has a boat moored in the marina which he slept on the previous night.  There was little wind while we sat and chatted, but it picked up when Brendan left at about 10:00am.  I rigged up and got going on my directional board.

There has been very little good wind during winter of late so I have been hanging out for a good session.  I have booked to go to Bali in August on a Ben Wilson Wave Camp so I am also keen to get some more experience on my directional S-Quad board.

Some wind at last!

The wind was around 15 knots initially, and the half dozen kiters out were scratching around for wind close to shore.  A westerly at St Kilda is onshore so it can get a bit crowded at times near the shore.

I was able to get going upwind better and stay out from the fray a bit.  I haven't tried gibe turns on the board yet so at the end of each run I stop, grab the rear, spin it around, reset my feet then get going.

The air temperature was around 13C and the water quite cold, but my nice new 4/3 steamer wetsuit, booties and neoprene gloves kept my quite warm as I dropped in the water for these turns.  In the shallow water I walked out past the shorebreak before restarting.

To get going I grab the rear footstrap and poke my foot in it with the kite gently pulling to the right. I then bring my front (right) foot to the front foostrap and poke the toes in it too, with a wiggle to get them in.  Some power in the kite then whoosh - up and going.

It was great to be out again after a longish break.  After about an hour the wind picked up to around 20 knots so I was able to go upwind and get some good speed up.  I tacked as far as I could along the beach getting up as far as Middle Park, then returning to the Marina breakwall.

The limiting factor turned out to be the muscles in my forearms - they were aching from the exertion.  I hooked my palms over the bar to rest them and also had short breaks while turning.  I came in around 1pm, trying a few carved turns and riding toeside down, which was not too successful with the seat harness.  So I did some slalom turns onto toe side without actually executing a full turn and landed my kite.  Tired but very satisfied.

Note the wind chart does not show all the day's wind due to an apparent problem with the Fawkner Beacon data feed. 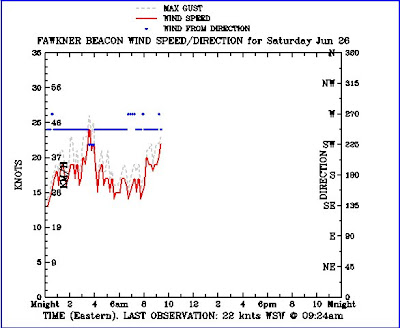 Driving along beach road a rain squall came through so I think I left the water at the right time.

I dropped in at SHQ to buy a replacement line knife as I had lost the one tucked in my harness pocket.

I am also sussing out what to take to Bali and how to carry it.  I may take my directional board in its own bag with bubble wrap around it inside the bag.  It is a bit too long for my main gear bag.

The advice was to:

Posted by Peter Campbell at 5:57 pm