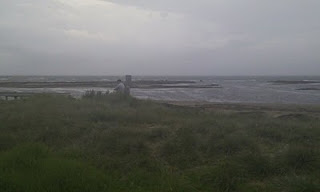 
Having someone to both launch and land your kite in these conditions is recommended.   Beaumaris is definitely not a good place for beginners - the surf club looms large on the beach and the reef is unforgiving. However, it gets clear wind for the south and southwest.
Posted by Peter Campbell at 7:33 pm