Session 494. November 2019 kitesurfing weekend. A downwinder was planned from Shallow Inlet to Darby Beach on Wilsons Prom. I had previously kited most of the way down there and back in 2018. 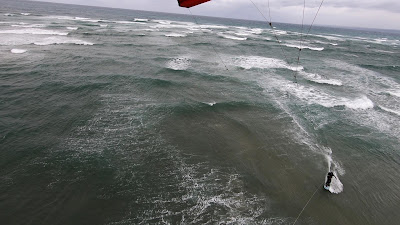 Here is a video of the downwinder

We set up a car shuffle between Darby River and Shallow Inlet Caravan Park. I drove back and one of the last to launch.  The wind was solid 25 knots.  It was a slow trip with several kiters working their way down the inlet.  I tacked and waited for the others to catch up near the mouth.

Exiting the inlet mouth the wind was stronger and the waves were big. I followed a line between the first and second breaks, mainly concerned with not crashing. There would be no easy rescue here in event of a mishap, it would be a long walk out.

I made good progress dodging breakers and headed out the back a few times. Conditions were wild and woolly, I was nearly overpowered. I got caught by a few waves and lost my board then retrieved it from the surf. 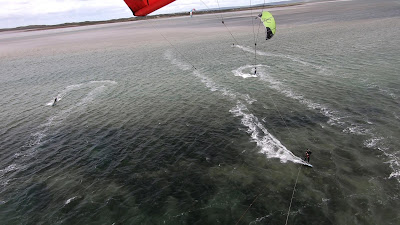 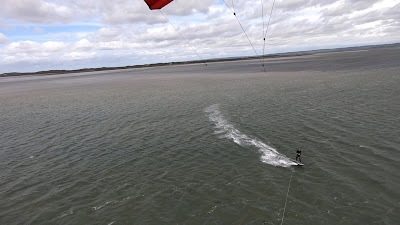 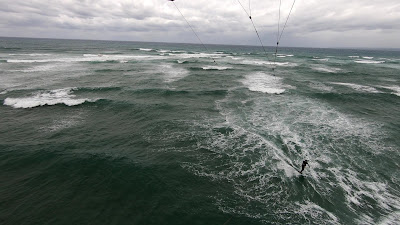 The last time I was approaching the large rock spire and reefs not far from Darby Beach. The area looked dicey so I decided to sneak through a channel between the spire and the shore, hoping there was enough water.  I approached cautiously, finding enough water to get through with a big sigh of relief.

I finished in the waves close to shore approaching the big coastal hills of the Prom and pulled my safety to land the kite. The wind was still very strong.

No sign of any others coming for a while, then Mike appeared, very pleased to finish.  Stu Styles was next followed by Anthony, Stu Webb and James. I was worried that some of the other guys had followed and may have ended up on the remote beach.  I checked Whatsapp and got the message that they had reassessed at the mouth and decided to walk back, so all was good.

This was a cracking downwinder in "full conditions". I needed all my experience to make it.
Here is the visual animated route.
And the track log stats