Grabbing a tiger by the tail at Brighton

Franz, and fellow kiter I have just met, called me today around noon to suggest a kiting session at Brighton in the good northerly that was blowing.  I checked Predictwind, and it looked like the northerly would be there for the afternoon, so I headed down after a hasty lunch and met Franz at Brighton beach.

It was blowing well.  Some whitecaps were visible and several kiters already on the water were zinging along.  I decided to take out my 10m kite as it looked like the wind would remain strong.  This was the right decision!

After recent "cool northerlies" of around 15-20 knots, this was a different beast.  It was like grabbing a tiger by the tail.  The bar was yanked hard, even with full depower on, and the kite was jerked and tugged all over the place.  Speed was the order of the day.  I kept a slow tack out into the bay swell, but come back in fast.  Going upwind was a cinch too.

Franz was on the water for a lesser time as he had a commitment mid afternoon.  I made my way back up to the marina and even further up.  There was a curious small wind shadow (about 15knots) behind the marina, but every else it was going off.

I did a few small jumps, wary of getting hoiked towards the heavens, and actually succeeded in a couple of small jump transitions.  The key is to get the board oriented while in the air and fly the kite fairly hard in the new direction.  Its not perfected yet though.

Coming back downwind was a hoot.  Lots of speed and some nice slalom turns.  I did a bit of toeside riding but stacked once.  The kite was so powered I had some trouble getting the board back on my feet with one foot in it and getting dragged.

Back on the shore, another kiter landed my kite.  Self-landing would have been a real hassle today, so that was nice. 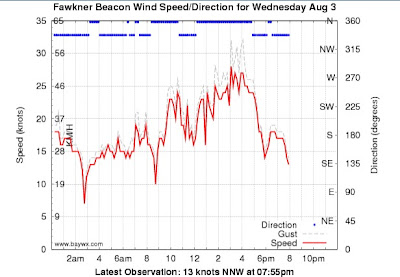 Great stuff Pete. Wish I could have been there. Fascinating to see the stats - max speed 41 k - amazing. I like the altitude reading too.