Kitesurfing at Hampton in bay surf with helmetcam

There was lots of wind and rain overnight, with storm rolling through on Wednesday morning.  Stuart and I waited until conditions settled down a bit then headed to Hampton.  We got on the water a bit after 1pm.

I took out my Crossbow 7 as conditions looked "full" and I didn't want to be overpowered.  It was the right choice. I had plenty of power, particularly using the S-Quad surfboard.  Small kites are nice to fly.

We headed over to Green Point to catch some waves, then returned to Hampton.  There was a nice bay surf breaking between the rock groynes, and further out in a few places.  The surf on the main beach was great too.

I was concentrating on both heelside and toeside powered turns and riding toeside.  The waves were nice, and the wind consistent.  There were about 10 kiters out when we arrived, mostly on surfboards.  Many had departed by the time we finished.

The sea breezes are gone now, so its great to score a session like this as we enter the "winter doldrums" - and storms.

I took this video with my helmetcam.

Here is the wind chart.  Some gusts nudged 35 knots. 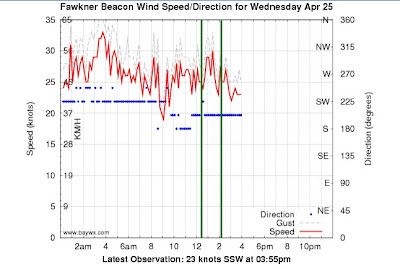