An unexpected southerly at Hampton

Session 36. No stats. No buoyancy vest, no GPS. Naked this time!

In the middle of the afternoon the wind picked up to a good southerly at about 20 knots, which would not help the Sydney to Hobart yacht race in progress. I got down to the beach with Lena and my daughter Chloe at about 5pm with the wind still coming in strong. About eight other kiters out and several windsurfers.

I was intending to trial my kite cam, but was in too much of a rush to rig up the attachment to the kite spar. More on this later.

I took out the Crossbow 12 and got plenty of power. Several fast runs out into the waves to the buoy, then back surfing down onto the waves on the return leg.

I wore the surf socks again, but they are a little tight in the footstraps of my Litewave board.

I was inspired to try a few jumps and succeeded. Not a lot of height, but I got a bit of distance on at least 3 occasions. Dunked the kite too, but I was able to relaunch it, albeit a bit soggy.

I met Rick there just when I finished after about 1.5 hours of kiting.

We were having a chat on the beach when we noticed a fellow with his kite in the water heading for the rock groyne so we trotted over to help him out.

Previously Rick had his kite tangled with another one on the beach and had to use the safety release to get out of trouble. Watch out for others when you kite! Remember the beach is the most dangerous place, and please don't endanger others.

Here is the wind graph for the afternoon. 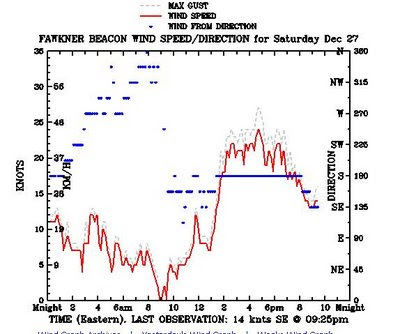 Posted by Peter Campbell at 9:29 pm