Session 51: Sunday 26 July 2009
Dried the kites out after the morning bike ride (to Ellis Beach), then wandered across to the Treetops foyer to get a forecast. There chalkboard is not in use any more but the guy behind the counter looked up Seabreeze. 15-20 knots was forecast for the afternoon.

The palm trees around were waving, so I estimated the wind at above 20knots. I rang Bretto - he said the wind had just dropped - so I took the 12m and 14m kites to the 4 mile park.

All (30) kites on the beach when I got there at about 1:30pm. Pumped up and chatted to some locals. They were complaining about the beach being too popular and talking of kiting elsewhere. It was not crowded by Victorian standards.

The breeze picked up at about 2:30 so I headed out. Fast tacks. Got in a couple of jumps on the right tack. Practising toe down riding. I can do it on the right, but not the left tack. Went a long way out and back. A few beginner riders nearer the shore. I was a bit wary after yesterday's crossed lines so I gave them a wide berth. 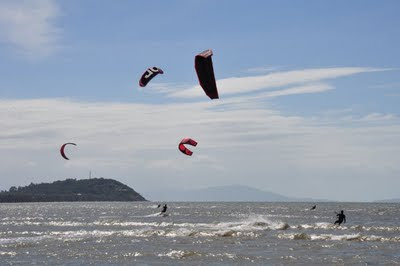 Went out to near some 3 cats. Two fish jumped fast out of the water around me. OK if they were scared of me as a potential predator, but not so good if a real predator (such as a shark) was around so I scooted back in.

After about 1 hour I noticed a couple of kites going downwind. Thinking it was Bretto's downwinder I followed. Fast planing. Nice not have to keep edging and have a look around.

I travelled out then back into the waves. Had to be careful jumping as the wind was getting stronger and the water near the beach is shallow. The wind was getting stronger so I depowered the kite about 50%. I went out a bit past the point then returned to the smalll surf. Caught the board in a wave once and had to retrieve it in the shallow water. 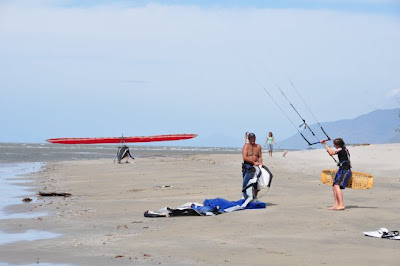 Quite a swell building up out further. After a few tacks close to the lifesaving flags I started scoping out a landing. One of the two kiters was way upwind, the other eventually went into the beach where his girlfriend landed his kite. It was too good an opportunity to pass up so I came to shore and he landed my kite. 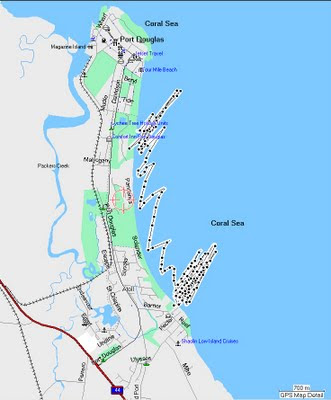 We chatted briefly. He was a Russian, with accommodation just nearby. No wind in Russia this time of year apparently.

Self landing could have been dicey as the wind was nearly onshore and there were people walking on the beach. Flagging the kite with the IDS would work but actually getting it to
land on the sand would be the hard bit. No sign of Bretto, so it looked like I had to find my own way back.

I carried the kite along the beach to the ramp, deflated it and carried it onto the grass where I rolled it up and secured it within the harness. Stopped for a coffee and biscuit then walked into town along Macrossan St. Doug was not in the shop, so I caught a shuttle bus back to Treetops, walked through to leave my gear at the unit, then onto the kite beach to pickup the bike, the other kite and get my key.

A great day kiting in paradise again. My helmet cam attracted quite a bit of attention. 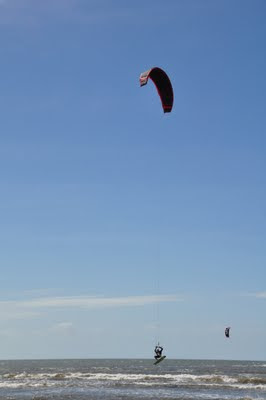 However, the long recording to the end of the card doesn't have a properly terminated file. It seems that turning record of manually is advisable to ensure the recording files are appropriately created.
Links
Posted by Peter Campbell at 12:24 pm