Some kiteloops at Hampton in lighter wind

Session 78, Thursday 14 January 2010
Kite: Switchblade 14m
Location: Hampton Beach
Wind: 15+ knots S
Duration: 7:15pm to 8:00pm - 45 minutes
Stayed at work until 5 so I missed out on the bike race at Sandown. A 20 knot Southerly was on though, so I headed for Hampton when I got home arriving at the beach at 7pm. A few kites were out, but the wind was dropping to around 16 knots so I rigged up the Switchblade 14 and headed out.
It was nice carving and kiting into the sun sinking towards the horizon. I was able to go crosswind for a couple of tacks, dodging a couple of large sailboats heading into the Hampton marina. A few jellyfish were about but they seemed to be about a metre under.
It was nice coming back in and carving some turns down the big swell humps rolling towards shore. The wind dropped a bit further so I did some "kite down" power turns and also some kite loops, including two in sequence (one right followed by one left). Lots of power in a kiteloop even in light wind. You just have to let the board run downwind a bit when the power kicks in. 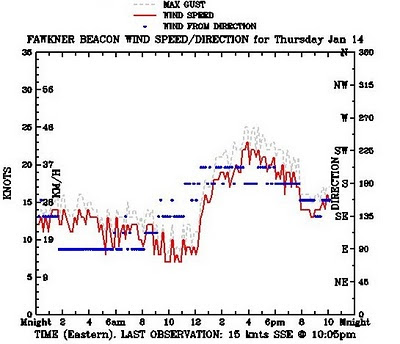 I played a bit in the surf on tacks watching out for a couple of shallow reef sections. Eventually I landed at Middle Brighton then helped Rick land his kite. I ran back to get my car while Rick stayed with the gear.
My right arm was feeling OK. It was a bit sore around the elbow but no sharp pain during or after the kiting. It seems to be stabilising but it was good to have a light session.
I got an SMS from Stuart on the way home saying he was in accident & emergency with Tarren who had hurt his ankle and possibly broken it when they were kiting. No update on the outcome yet. Fingers crossed Tarren . . .
Update Friday 15/1/2010
Tarren's ankle is broken. He landed a jump badly in shallow water. Tip from Stuart: Don't jump in shallow water or near the shore.