A great downwinder to Port Melbourne in the New Year 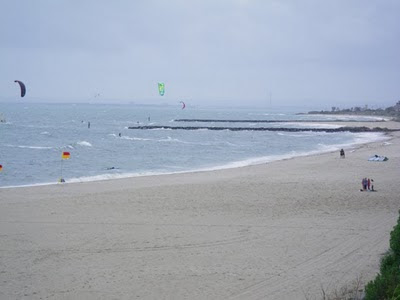 Hampton Beach departure point
I was really keen for an adventure, so I decided to attempt a downwinder to St Kilda or beyond. The wind was about 25 knots at South Channel so I decided to take out the 10m kite in case it got stronger in the north of the bay.
I stashed some gear (kite bag, foam sandals, shorts, shirt & wallet) in my 18l waterproof backpack, then launched about 12:45. The wind had backed off a bit, but there was enough power in the 10m kite so I headed off on the tour.
Out to sea at first for a distance. Some really big swell forming as I came down and back in to Brighton. Great surfing; the wind carries you onto the waves which you can then surf down. Carving and S turns are great. I carved on the edge right around to finish the turn toe side down and kept going. Seems simple, but you have to watch where the kite goes. Its a lot of fun.
A few jellyfish lurking beneath the waves, but not many. I surprised one cormorant a fair way out. A felt a sense of solitude too. There were kites closer in at Brighton, but open water where I was. Great views of the bayside and the city too.
I came right in to Hampton over the reefs, then headed on down past the Brighton pier and marina. Not a place to ditch the kite as there is nowhere good to drift in, so I exercised some caution. Rounding the breakwater is a relief as beach is visible. I came in past the breakwater and closer to shore for a look around, but there was less wind so I headed straight out again.
It was better surfing the waves on the starboard (right) tack rather than the port (left tack). I came into the rock wall just near North Road, then headed to Elwood Beach where three windsurfers were enjoying the small surf. I caught a few waves then headed past Point Ormand - just clearing the reef of the point - then headed out again on a tack towards the refineries now visible at Williamstown.
I was contemplating a crossing to Altona or Williamstown, but given I was on my own decided that staying closer to shore was prudent. By now the wind was backing off a little. I had to work the kite occasionally then another stronger gust would come through and I would be zooming across the water again.
A large cruise boat was visible at Port Melbourne so I decided to head past it and finish at Sandridge Beach. I passed by the St Kilda marina and breakwater a fair distance out, and saw some kiters at St Kilda a lot closer in. A large container ship was heading for the Yarra too past Williamstown.
The wind dropped a little further, so I was mindful of staying out far enough to make it to Sandridge Beach, as it was too light to go upwind. By now most of the kites at St Kilda were in an stationary. Then I noticed my right foot was swivelling! The right foot binding/strap was rotating on the board. Another loose screw. Tip: when checking your board, check all screws (fins and footstraps).
I was intent on keeping a straight tack and some speed up to get past the moored cruise ship and the Beacon Cove pier complex where there is no safe landing. Sandridge Beach loomed up as a welcome goal, then the wind died. I couldn't keep the kite up and started drifting slowly into the beach from about 300m out. I was contemplating a self rescue to get the kite lines out of the way and drift/swim in, but then the wind picked up. I relaunched the kite and came straight in. 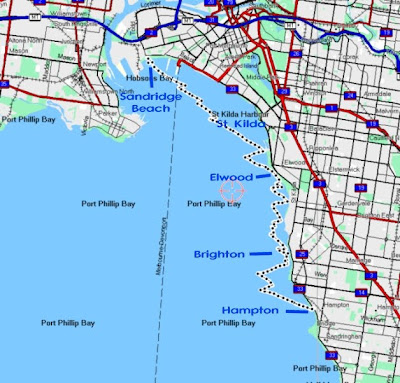 GPS track log of downwinder
I was really stoked to complete this adventure. I changed into my dry clothes, packed the kite, stowed the wet gear then walked to Port Melbourne for a fantastic coffee and banana chocolate muffin. The batteries in my helmet cam were flat and I didn't set up the kitecam properly, so unfortunately there are no action shots of the downwinder. 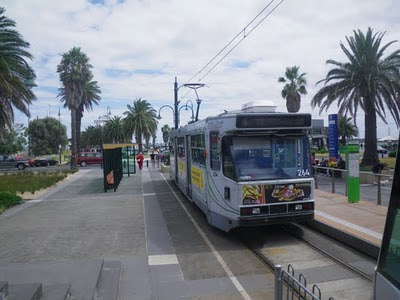 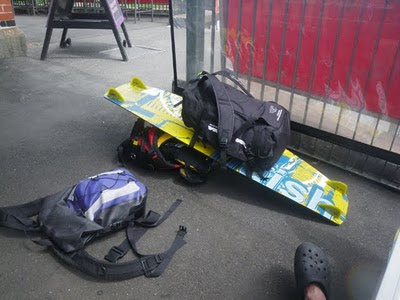 My gear at the cafe - bring on the latte and muffin!
I then caught tram 109 to Colllins St, walked down Collins St to Flinders Street Station (getting some curious stares along the way) and caught the Sandringham train back to Hampton. It was a short walk from the station back to the car.
The wind had picked up to 25+ knots. Ivan and a couple of others were kitesurfing hard and jumping high; they felt overpowered on 10m kites so I landed them for them so they could re-rig. A few photos of them in action are below.
Ivan said a helicopter had been buzzing a big shark (3m+) that was hanging around the Cerberus not far away. Food for thought . . . 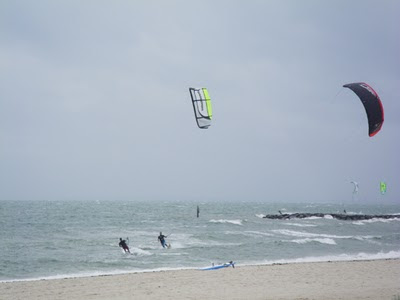 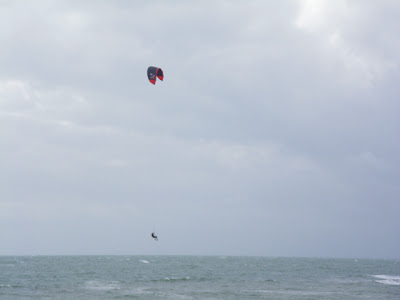 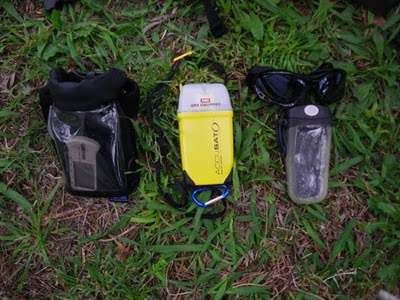 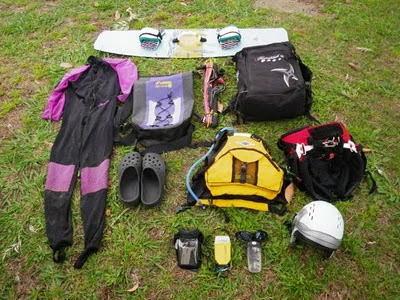 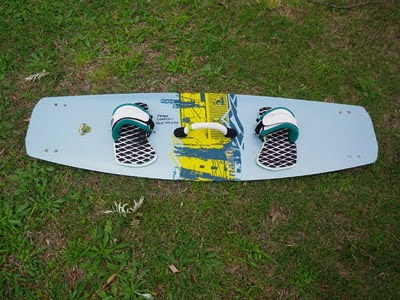 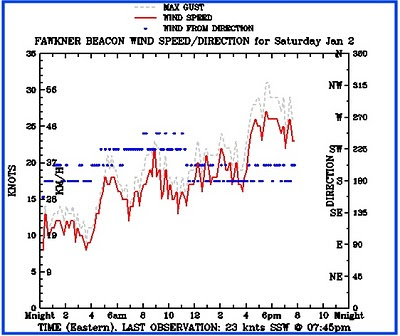 Posted by Peter Campbell at 7:52 pm

Also some nice gear you got.

I like this place! I love the idea and wish there was a place like this in Astoria, Queens. I am a surfer and found a "real surfer bar" in Point Break NYC. I am kinda jealous ;0PIts filled with surfers, people who like surfers, people who like the beach and people who don't want to live close to town. I really like this place. You know what they have these real Proctor and Channel One surfboards on the wall. It's nice for coming any day of the week and eating a late brunch. The food was outstanding. The brunch and sides were prefect and tasty. It is a perfect "escape" from city living. It is probably one of the only places where you can get a nice frozen pina colada or margarita. The service was on hit. They came up and checked on us so many times and made sure everything was up to par. It gets very active and the bartenders keep everybody having a good time. The bartender was very accommodating. He was nice enough to make a drink, that wasn't on the menu, for me :0) Did I mention the bartenders are nice eye candy. It was amazing to see their “das boot” which is shaped like a boot filled with beer. Don’t get me wrong, I am not drunk…it’s an actual boot shaped beer container ready to be emptied. Try it ..You will love it!! Oh. How can I forget, they even have a wheel o' shots where you just have to spin it and have to drink whatever shot it lands on!! Now call that bar creativity at its best!!! And when I spill a tray full of shots on myself, the bartender so kindly remakes them for me? Good music, too, and the decor helped us weather an otherwise overcast and rainy day. You know that old song "Brandy"? It goes, "Brandy, you're a fine girl, what a good wife you would be. But my life, my lover, my lady is the sea." I believe Brandy works here. No reason, I just do. And that song happens to be a guilty pleasure of mine, so that's a plus in my book. You can simply waltz over to this colorful and warm establishment, enjoy some drinks with friends, and walk home. The bar is right at the center, so you can walk to either side for drinks, and the bartenders are friendly and at your service. There is a variety of seating, good music, and friendly neighborhood people to make your time more enjoyable. Not pretentious, very cozy, I think Point Break is a fabulous place to spend some time with friends.