A tour from St Kilda to Sandridge

Session 80, Saturday 23 January 2010
Kite: Switchblade 14m
Location: St Kilda
Wind: 20 knots S
Duration: 11:00 to 1:00pm - 2 hours
Some frontal wind came through in the mid morning which was a bit gusty for kitesurfing. Stuart headed out fairly early and got in some good runs. He was leaving St Kilda just as I was about to go out. I took out the 14m kite due to the likelyhood of the wind dropping out.
After a few runs with reasonable power off the beach I decided to go for a tour and headed up past Station Pier and the Spirt of Tasmania to Sandridge beach. It is a nice ride, whizzing past some of Melbourne's most fashionable bayside suburbs. The wind dropped a little at Sandridge, so I abandoned any thoughts of heading out past the car shipping dock across the Williamstown, turned around and headed back to St Kilda.
The wind picked up so this run was quite enjoyable too. Back at St Kilda I headed into the surf zone inside the marina and did quite a few runs along the small break right up close to the Melboune Yacht Squadron. There were about six kiters in this region so we were watching our lines and kites. It isn't always easy to decide what to do when someone turns just in front of you.
I did some jumps exercising some caution. The hearing in my right ear has not yet fully returned - I may have to get it checked out further. Some of the other kiters were doing bigger jumps and landing in the shallow waves. Think is a bit too dangerous for my liking - if you stuff up then you could end up spudding into the bottom like Tarren did and breaking something.
After about two hours on the water my hands and feet were going a little numb so I came in and had a coffee at the nice new beach cafe right on the sand.
Maybe we can do the downwinder across to Altona tomorrow. We have all the required safety gear now and just need the right time and the right wind. Fingers crossed. 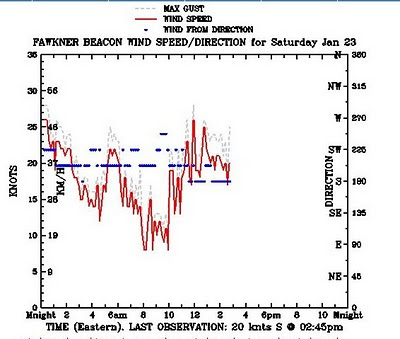 Posted by Peter Campbell at 2:46 pm