We headed out from the Argentiere hut and skied up for a short distance toward the Col du Tour Noir.  We say Andy and Heiko climbing a steep couloir on the Aguille Rouge, then skied back down to the Argentiere Glacier on firm icy snow.

We met up with Simeon below the hut and skied down the glacier for a bit.  Simeon headed back to the Argentiere lift while Mark and I tackled the Col du Passon.

The steep traverse on icy snow was quite intimidating.  We started walking with our crampons on but were soon punching right though the icy crust, so we swapped to skis with skins.  A slip here could easily result in a long fall to the glacier below, possibly over steep rocks.   One French skier flew up past us on wide skis, skins and ski crampons.

This route is now used when the Col du Chardonnet is impassable due to the receding snow, as has been the case in recent years, but not this year.

After a lengthy traverse we gained some easier slopes then headed up to the col, which is quite difficult to pick out.  This would be tricky in poor visibility. The final climb up to the col was steep and icy. We used or ice axes and crampons, with some occasional front pointing.

At the top I chatted to a couple of Swedish skiers and two french locals while Mark climbed the col.  Mark and I skied down with the two French skiers who were happy to show as the way.  There were no obvious crevasses high on the slopes or the Le Tour Glacier and the snow was quite good, but it turned crusty and wet as we descended.  I managed to do a somersault once when my ski tips dived below the crust.

We headed left down the glacier skiing the increasingly heavy snow, but there was no sign of avalanches.  Towards the bottom the snow ran out so we scrambled down steep slippery scrub to get to a final patch of snow at the finish of the run.  The French guys said we might see a Sanglier (wild pig), but we didn't.  We had French cheese and sausage for lunch at the creek.

The route down the middle of the glacier had more snow but is more dangerous due to small cliffs and crevasses.  We found out later a skier had died on this descent a few weeks earlier, caught in an avalanche.

We also found out that a local "speed flyer" - a skier with a small parachute (not as big as a paraglider) had also just died attempting to launch off the Aguille du Midi.  Many die around Chamonix, locals and visitors.  We were determined to not become another statistic!

We chatted at Le Tour waiting for the bus, talking about extreme skiers such as Jean Marc Bovin (dead), Patrick Vallencent (dead) and Sylvain Saudin, who used to have a restaurant in Chamonix, and possibly still does.

This was another hard ski day that tested us both. We were happy it went well. 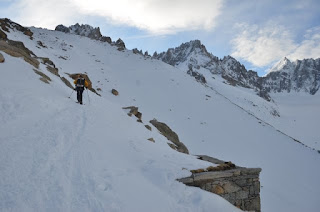 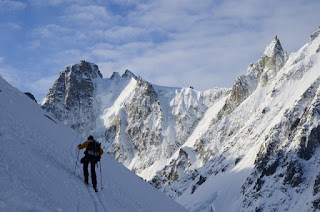 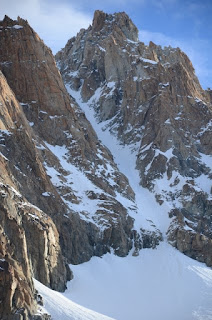 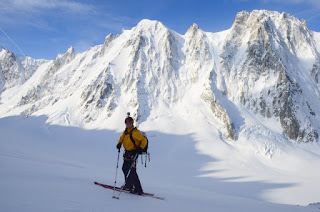 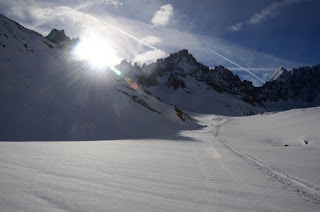 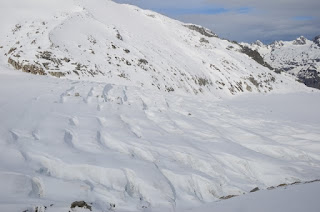 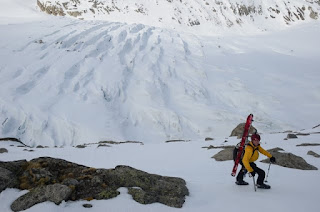 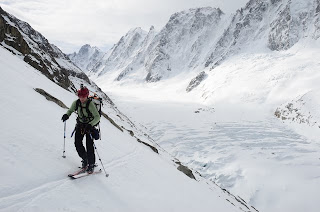 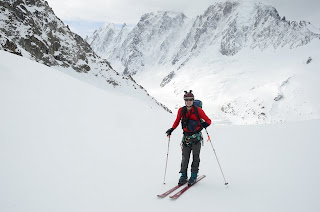 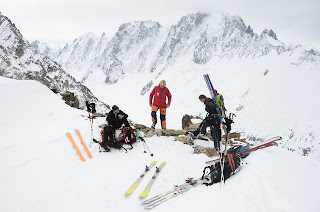 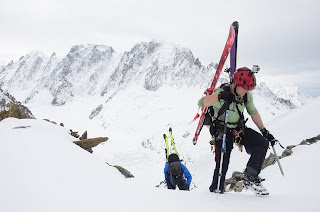 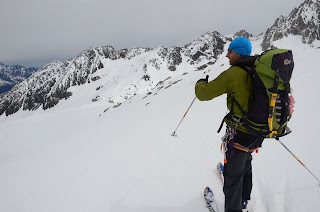 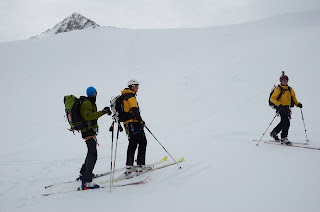 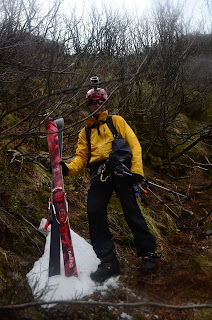 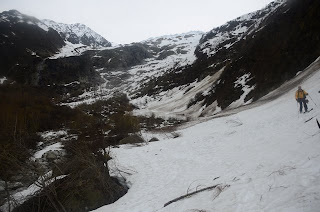 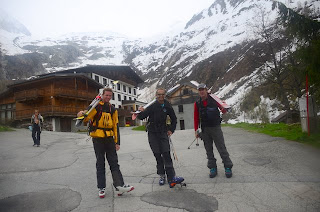 Posted by Peter Campbell at 5:46 am