Back from my adventures in France and Switzerland, it looked like there could be some wind at Parkdale. Stuart and I headed down late in the afternoon.  It was blowing a bit over 12 knots so we decided to have a go.  It was cold, overcast and gloomy, but once in the wetsuits we were warm enough.

There was just enough wind to get going, which was nice, but not quite enough to stay upwind.  The shorebreak was quite heavy too.

I think I could have got going on my Sector 60, but there wasn't quite enough wind to power up the surfboard. It was nice to fly the kite though. 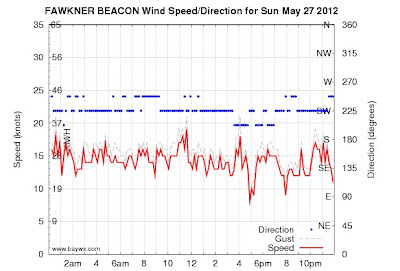