Session 401. It has been a strange summer so far - sea breezes have been weak or absent, then raging northerlies spring up.  The wind forecast looked good for a downwinder so James, Stuart and I headed off from Beaumaris. Initially the was enough wind to keep me going with the big kite, but it dropped off. 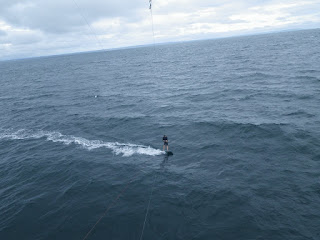 Stuart dropped his kite and couldn't relaunch it.  Heading out I was concerned that I might drop mine a long way out so I headed back to shore and landed it before I got to the significant obstacle of Black Rock and Half Moon Bay.

I walked up and swam out to help Stuart get his kite in.  Swimming in over the reef (no booties again) I brushed the side of my foot near the base of the big toe on something sharp but I thought  I had avoided it.

After we packed up the kites I carried the gear up to the road near the Black Rock clock tower while James and Stuart went to get the car.

Later that night my left foot was getting very sore.  I went into Epworth Emergency the following day and the doctor fished out 2mm of sea urchin spine that was in my foot and causing the swelling.  I got a tetanus shot and a course of antibiotics.

I will wear booties on downwinders from now on . . . 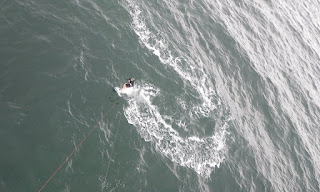 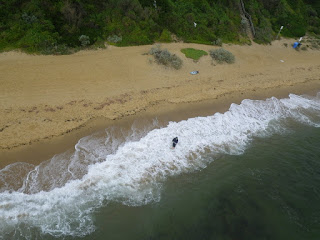