Some more information on my hamstring injury.

When I came off the foil board I was lofted. While in the air I felt a "pop" and immediate pain. It felt like I had dislocated my left hip joint.

I was able to body drag with the board back to the beach then hobble back to pack up my gear and walk back to my car.

My left buttock was very sore underneath - I put ice on it and took some anti-inflammatories.

Diagnosis
I saw a sports medicine doctor (GP) - he said I had most likely injured the ligament attachments of my leaf hamstring tendons - circled in red in the diagram below. 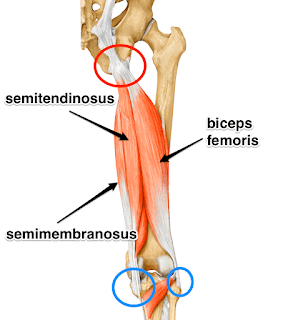 He said that the injury would most likely heal with surgery and suggested I get an ultrasound.

The ultrasound was inconclusive in the zone where the injury was.

A friend recommended I get an MRI so I did.  Showing the results and report to the doctor, he said the damage was worse than he thought.  The attachment of the "conjoined tendon" (semitendinosus & semimembranosus hamstring muscles) was completely detached and retraced 15mm.

The attachment of the other tendon (right next to it) was stressed but not fully ruptured.  He suggest I get specialist advice on whether surgery was required.

I made appointments with two surgeons who specialise in hamstring injuries.  I always get two opinions on something this serious.  If they don't agree I would  get a third.

However, both agreed that while surgery was possible, it would be best to rest and wait it to heal then get physio treatment.  This was a good option for me as 3 months recovery and 6 months rehab for the surgery option was not attractive.

The physio gave me a succession of progressive exercises to gradually strengthen the left hamstring.  It has improved to the point where I can now do some mountain biking (not to vigorous) and AT LAST some more kitesurfing (avoiding major crashes - no foil board!), and I can recommence yoga.

My sanity will be restored.

In hindsight, I think had a "grade 1" hamstring injury before the crash - the muscle and tendon was feeling quite tight.  This is apparently commonly overlooked.

The subsequent "grade 2.5" injury (with 3.0 being full detachment of both tendons) may have been partly due to the previous injury.


Now for some more kitesurfing, and mountain biking . . .
Posted by Peter Campbell at 10:35 pm

Great info thanks. I have just got my hamstring sewn onto my pelvis. I did it kiting in big waves and could off prevented it by stretching weekly. I thought i was an unbreakable cat at 44! I have at least six months till confident kiting at best. Lewis
Sirensurf@hotmail.com