A good breeze at St Kilda after a lean spell

Session 66, Saturday 19 December 2009
Kite: Switchblade 14m
Location: St Kilda
Wind: 15 knots S
Duration: 2 sessions - 10:00 to 10:30 and 2:15 to 3:30
It has been a rather poor season for wind so far in Melbourne and on Port Phillip Bay. Stuart and had headed down to South Melbourne beach on Friday after work but the forecast wind did not arrive.
We were suffering cabin fever by the weekend and itching for some more wind, which arrived on early Saturday morning. Stuart and Tarren nailed it at about 9am. I caught the tail end at 10:00am and had a good run right over to the Kerferd Road Pier.
It was great to get out carving on the green water for 30 minutes before the wind dropped again. I did some kiteloops on the beach for practice. Stuart and Tarren left. I hung out for about an hour but the wind did not return and the Baywinds site showed little at South Channel, so I headed into Port Melbourne for a look around and some lunch.
I visited the Kite Republic shop - which is quite small but did have some gear. Then I called in at the Freedom Machine bike shop, where I found a nice Giant time trial bike which I bought for a good price.
Returning the beach, the wind had picked up to 15 knots so I headed out for a second session. It was good kiting. I did a couple of runs past the breakwater into the swell, then headed back in past the boats to the inner marina "small surf zone". It was good fun ripping in over and along the small surf, turning very close to shore, then back out to the boats.
It certainly gets busy in this area, you really have to watch who is coming at you and keep your kite at the right height.
I then cranked up some speed and headed back out to the breakwater. I did a couple of big jumps off the small swell, landing OK. There was a yacht race coming in so I was careful to avoid them as they headed in to the harbour.
I came it at about 3:30 as I had to get home to mind Chloe. It was time for a rest anyway as my hands were getting a bit sore. On the way in through the "beginners zone" I scooted through the many kites flying high. I passed close to one, thought I was clear, but just clipped it. Mine kept going but the other kite dunked. Sorry dude. No excuses offered - I should have been more careful.
Looking at Google maps - you can actually see some kitesurfers in the water at St Kilda on the map images! Here are a couple of the shots. 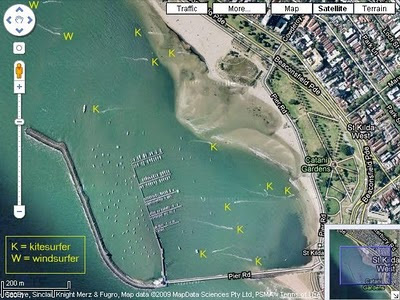 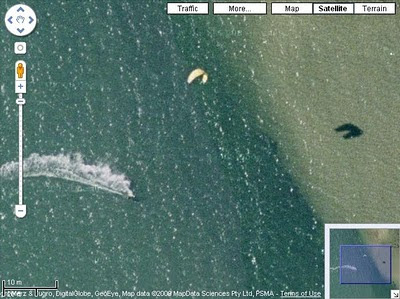 Close up of kitesurfer; note shadow of kite 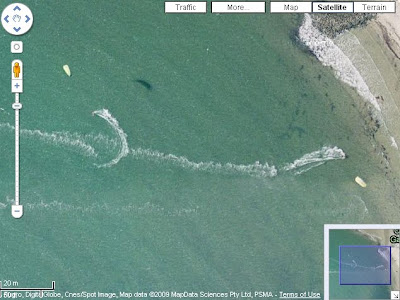 Kitesurfer turning (L) and another close to the beach (R)

Kites on the beach and a couple just offshore 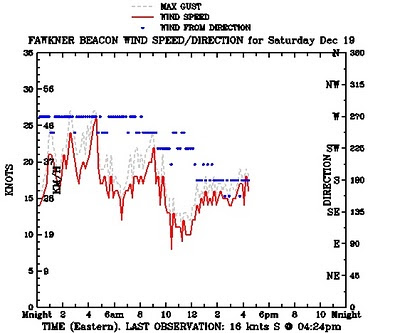