Kitesurfing the surf and reefs of Port Melbourne

Session 68, Sunday 20 December 2009
Kite: Switchblade 14m
Location: St Kilda
Wind: 20 knots S
Duration: 4:30 to 6:00 - 1.5 hours
Tarren and I hit the jackpot at Port Melbourne during the late afternoon. The wind was picking up to 15 knots. I was collecting a new time trial bike (yes, another bike) from the Freedom Machine in Port Melbourne. Lena and Chloe had come along to go to the beach.
Tarren and I met on the Port Melbourne beach at about 4:30 - with the Spirit of Tasmania ferry loading up at Station Pier for its overnight trip across Bass Strait. There is a good amount of sand for launching (more than Sandridge beach) and there were not too many people about.
It is a great place to kitesurf, but not for beginners. There are reefs at each end of the beach, with a good surf running over and between them. We approached the ferry to within about 100m just near a small rotunda on a pier, then zipped back towards the Port Melbourne Yacht Club. I did a couple of runs a bit further out past the Yacht Club to the surf near the small pier to the east.
I did a few jumps too, and did a big pendulum on one of them. Slalom in the surf was a lot of fun. Occasionally as set of waves would come in. Leaning back works to keep the board tip from digging into broken waves, but not always. Some broken waves seem to swallow the board and can stop you in your tracks.
Any more than 4 kiters at this beach would be problematic. Tarren and I had the place to ourselves, then another guy showed up as we were packing up. 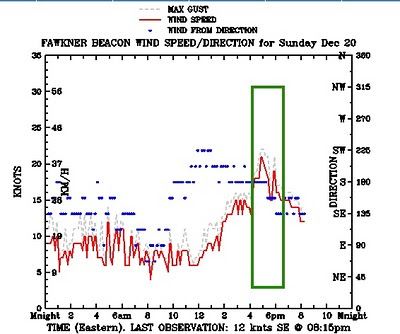 Posted by Peter Campbell at 8:18 pm