Riding a bucking bronco at Brighton!

A dangerous session today - very difficult wind conditions.  It was very strong and very gusty. It was like riding a bucking bronco.

When I arrived a kite was in the water close to the shore.  The rider attempted a relaunch, which was a bit "hot" downwind and one of his lines broke, so that was the end of his session. 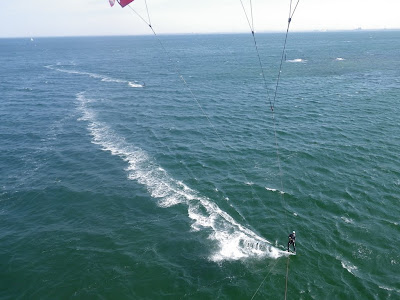 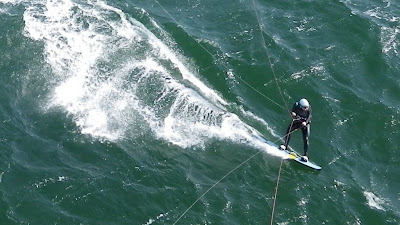 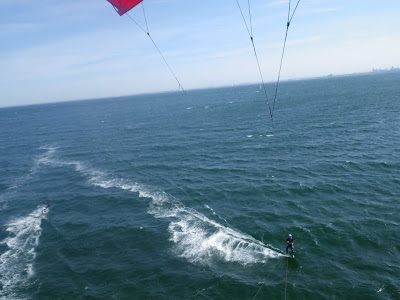 I got on the water at about 10:30 and kited for about 40 minutes in around 30 knots.  It was stronger further out and not so strong near the shore.  Stuart was out too.  We did the usual upwind tack out, then speed run back in with some slalom turns and jumps.   My kite was fully depowered, yet I still had to sheet out in response to the big gusts that were coming through.

Warning: these conditions are for advanced kiters only, and even then, only with the right size kite. 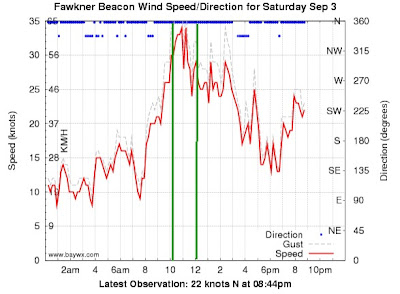 I came in to have a chat to my friend and Yoga teacher Tony Rothberg, who was watching from the beach.  While we were on the beach, a kite completely detached from a rider and flew for a while, then landed in the water.  It may have been one of the Cabrinha IDS velcro attachments ripping off, or he may have broken his leash (less likely).

There was no way we could catch the kite, and going out to get would have been riskly.  It then blew in toward Green Point, eventually coming into some reef where it flew again briefly then went down hard and stayed down, presumably with a burst bladder.    It was obviously damaged and may have been a write off.  The kiter (a Frenchman) took off in his car to get it.

While this was going on, Natalie Clarke was out having a good time.  A Channel 7 news photographer showed up "to get some photos of the wind".  He took some photos of Natalie and other kiters.  I worded him up about Natalie's great achievement kiting across Bass Strait last years.  The photos may make it in tomorrow's Sunday Heraldsun.

I headed out for another short session.  The wind was even stronger with bigger whitecaps evident.  I was powered up, and coming back on a tack decided it was getting a bit too strong, so I headed for the beach and a couple of guys grabbed my kite and said a major gust was coming through.  I was very happy to have the kite back on the beach.

Another rider commented as he came in that it was "dangerous conditions out there"; everyone agreed.