The sea breezes have finally arrived.  After a quiet morning, a nice 18 knot southerly came in during the afternoon.  I headed to Hampton and decided on arrival to do a downwinder.  I rigged up the Noise 12m and setup my GPS, kitecam and linemount video.  Lots of gear to record the trip!  I took my waterproof backpack with foam sandals, the kite bag, boardshorts and rash vest, and some money for the trip home.

I did a run out to have a look around, came back to the breakwater, then headed off downwind.  I cruised out past Green Point, then came in to the reefs, then headed down to Brighton.  There were some nice bay swells to cruise down, and I rode toeside a bit to rest my legs. 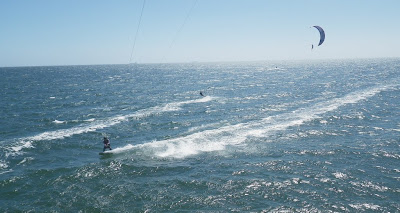 I did a couple of tacks and Brighton among about 10 kiters, then headed out offshore past a yacht that was motoring back to Brighton Marina.  I tacked back towards the marina breakwater then back out towards Elwood.
There were a couple of kiters and windsurfers at Elwood.  I came in close the beach, then did a small jump. Unfortunately, my kite did a Hindenburg as I swung under it and hit the water.  It inverted as I tried to relaunch it while I drifted slowly to shore.  Then I got lucky and relaunched it about 100m from the beach - persistence sometimes pays off!
The wind had dropped a little, or there is a wind shadow at Elwood, but there was enough for me to head out past St Kilda breakwater.  The water was getting noticeably dirtier (brown) as I headed up the bay.  I was contemplating heading in to St Kilda, but the few kites in the air were going nowhere, so I headed towards Port Melbourne.
The wind dropped further and I had to work the kite hard to keep moving.  About 500m of the beach it fizzed out to 10 knots, so I did figure 8s to get into the beach.   I ditched the kite just offshore then swam in and grabbed it.  I packed up my gear on the nice grass next to Port Melbourne Lifesaving Club, had a coffee and ice cream at the shop there, then walked to get the tram at Port Melbourne.

I returned to Hampton by tram to Southern Cross, train to Richmond, change for Sandringham line, train to Hampton, then a short walk back to the beach.  I chatted to an elderly man who was interested in the gear, and the trip.  He was returning from the Melbourne Cricket Club having just watched the Boxing Day test of Australia vs India.  His grandsons kite too (Tribe Carew) so he as quite interested in kitesurfing.

This really is a great downwind tour.

Stuart and Tarren were on the beach back at Hampton. Stuart had just finished a session - the wind having picked up again, and Tarren headed out for some more.

The switch on the Contour Roam waterproof housing seems to be difficult to turn off.  I thought I turned it off at the destination, yet in continued to record in my bag when returning. 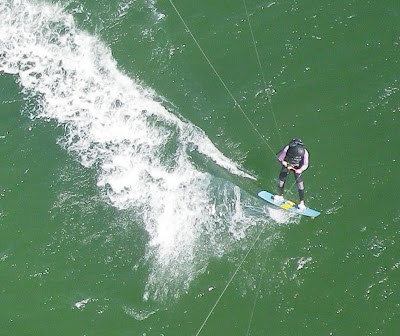