Session 457. Tired after our foil boarding on Lake Weyba but this was our last chance at a session late in the afternoon.  When I self launched my kite a front line snapped (it was looped over something) so I had to land the kite and re-rig.  There wasn't much light left so I tied a knot in the broken line, relaunched and headed off. 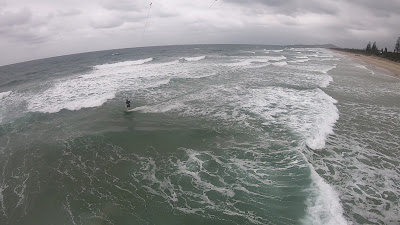 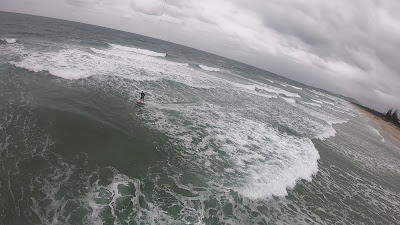 However, the kite was not flying well with the left front line shortened. It turned to the right very fastbut stubbornly resisted turning to the left!  I got out behind the waves and headed after Adam.

I was reluctant to get into the surf with the kite control compromised so I scooted along behind the waves.

Coming into the Peregian Beach I dropped the kite, relaunched it, then dropped it again. I released the safety and floating in, releasing the second safety when the kite was filled by a wave.

A messy pack up of twisted lines and a soggy kite in the fading light, then we walked up through the small shopping centre and caught a bus back to Castaways, which was very convenient.

In hindsight, heading off with the kite line shortened was not a good idea, but Adam did his first downwinder and was very happy to complete it.