Session 462.  The wind looked good for a downwinder so we left a car at Hampton and drove to Ricketts Point.  Once on the water it dropped a bit, particularly closer to shore. Stu headed back in to the beach, Anthony was some distance behind.  Its hard to figure out what is going on without comms.

I wasn't able to stay upwind so I headed off with some reasonable speed, it was great to get going.  Looking back I could see the others following.  I was in a pocket of wind and kept going.

There was a race of large yachts in progress, I kept well away from them as they sailed upwind.

I was careful to not go behind the Cerberus wreck at Black Rock it.  The Sandringham Yacht club in the distance was a good target.  I kited around the breakwater and the out on a tack looking back.  I could see both kites coming in the far distance.

After several tacks they were close to the breakwater then the wind dropped so I headed to the beach.  Stu and Anthony came in, very happy to complete the run.  Stu has swapped his kite to the Lithium 12 so he had plenty of power.

Anthony had to sine is 11 most of the way due to less wind.  Fickle conditions with around 15 knots. Its easier when a bit overpowered. 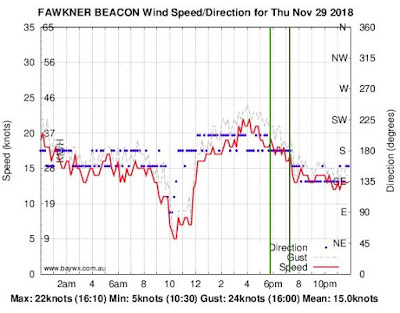