Hampton in Victory At Sea conditions 30 knots plus

Kite: Crossbow 7m
Location: Hampton Beach
Wind: 27127  -32 knots W
Duration: 1:30 to 2:34 pm - 1h 15 minutes
The forecast gale force winds arrived on Sunday with gusto.  Stuart and I were watching the wind chart for Fawkner Beacon and saw a 50 knot gust rip through with one of the fronts.
I headed down to Hampton around midday.  There was one other kiter on the beach, who said he was having trouble getting out through the raging surf.
Once rigged up, I had a lot of trouble getting out too.  The waves were pounding a 1+m shore break, which pushed me back in.  I tried a couple of times to get going and ended up on the sand,
I fully powered the kite, then waited for a lull in the waves in a quieter spot.  Once up and going I was fine.  What a buzz - big waves breaking way out.  Heaps of power in the 7m kite which flew like an angry hornet.
Going upwind was easy.  Surfing the big swells was fantastic.  Getting into the surf zone was interesting.  It was big.  I was careful not to get too close the beach so I wouldn't end up on the sand again.  I did several runs right up to the concrete barrier at the marina in from the rock wall.
I was careful jumping as a big prang tday could have ripped the kite and turned into an epic.  I did one jump closer to the shore and popped a few metres into the air, to the surprise of four beach-goers who were watching.
There was only one other kiter out - also on a 7m kite - and riding a Cabrinha S-Quad board.  He was really ripping it up, and toured all the way to Green Point and back.
I landed after over an hour's kiting with my hands and heels bit numb, but exhiliarated.  It was great to get out in such wild and invigorating conditions.

A local kitesurfer in action on the day, using a 7m kite and a Cabrinha S-Quad board 5'9" 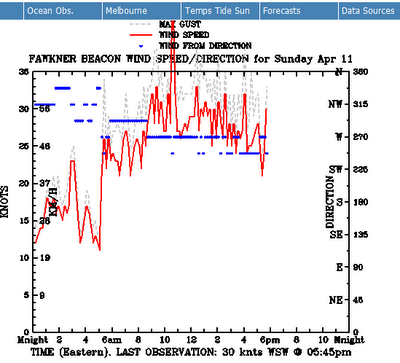 Posted by Peter Campbell at 6:00 pm