Gnotuk in a gusty northerly

Session 110, 11 November 2010
Kite: Switchblade 10
Wind: 20 - 30 knots, N
Location: Gnotuk Avenue
Time: 21 noon to 1:30pm
Headed for Gnotuk after a morning bike race at Casey Fields (Cranbourne) with a strong northerly blowing.  Stuart  was already there and headed out into the cross offshore wind.  I rigged up and joined him.  I was able to do my  first reasonable standing start, with my rear foot guiding the board.  I sank back into the water but kept going.
The wind was fairly mild close to the shore but was much strong about 300m out.  But it was patchy with some big holes in it.  We were able to stay upwind for about 15 minutes then it dropped to below 20 knots.  I headed in, not wishing to get caught offshore with no wind.
I waited on beach for the wind to pickup and kept my kite flying, practicing repowering it using the front lines - a handy technique for when  your kite threatens to drop out of the sky.
Then it picked up again, so I headed out for some very fast kiting. I ended up depowering the kite to keep good control.  I also managed one jump transition to a turn,  After about 20 minutes of fun I headed back in.  The wind dropped about 150m offshore and my kite hit the water, close to a marker pole which caused my some concern.
I guided the kite and lines away from the pole and eventually relaunched it and got back in.  Swimming in towing a kite would be hard work against the wind.
The water was lovely and clean and still fairly cool.  There were a couple of windsurfers out and one kite some distance down the beach.
We discussed the conditions and agreed they were difficult - definately not the time to crash your kite and do a self rescue - but good fun none the less. 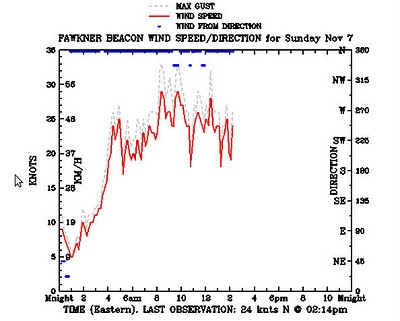 Posted by Peter Campbell at 2:47 pm