A sea breeze was forecast and blowing at Hampton this afternoon so I headed down late in the day.  It has been nice to rest for a few days, but cabin fever was starting to set in after over 10 days off the water.  I met Stuart at the beach and we joined about 6 other kiters already out.

I took out the Switchblade 10 as I was on the Sector 60; most other kites were 12m or bigger.  I had no trouble getting some good speed and going upwind.  It was lovely to get on the water again.

My task for today was to practice jibing.  I tried quite a few, and actually managed to do two successful jibes - the first ever.  However, I was not able to consolidate my feet and ended up coming off the board anyway.  Jibing is hard folks.  It is as hard to learn as getting up and going the first time, or maybe even harder.

Here was my progress:


I fell numerous times bringing the front foot back.  Its an unstable movement.  The board sometimes jetted away (weight too far back) or I just fell off.  Videos of this make it look easy, but let me tell you: it is hard.
Turning from the right tack to the left was even harder.  I need to practice toeside riding on the left tack.  I get around OK but tend to lose speed and fall back into the water.
The Sector 60 board is great to use. It goes upwind so well that I get plenty of practice doing jibe turns without losing too much ground.
I did some fast runs in, but the GPS seems to be reading some errors for the maximum speed, which is annoying.
Stuart tried the Sector 60 board at the end of day and was surprised by how well it went upwind, and said he found it quite stable too.
Session stats

Summary
Details
Timing
Speed
Pace
I may have logged my fastest speed to date of 52.6 km/h, but I am not sure about this given the obvious errors in some of the speed data.

The wind speed was around 15-20 knots.  So the Sector 60 board handles lighter wind very well, even when used with a size smaller kite than normal. 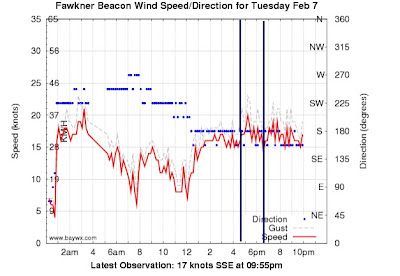