There was a nice 20 knot sea breeze on late in the day.  Launched at Port Melbourne, far from the madding crowds.  Two tacks on the Sector 60 and I was past the pier, one more tack could have got me to St Kilda!  I think I could have even got to Elwood.  Still amazed at the upwind capability of this board.

I had a breakthrough on my first turns.  I did a successful gybe to the right (my strong turn) followed by my FIRST successful gybe to the left!  Woo hoo!
I headed to St Kilda and did some nice speed runs into the flatter water behind the breakwater, faster than all the twin tips and surfboard kiters who were out.  The lower wind behind the breakwater made gybing much harder though.
I did a ripping speed run back toward Port Melbourne, then quite a few runs in the bay surf and some more gybes.  It is great to be making some progression.
Some things I have noticed that help:
And some issues:
Overall, a great session with good wind.  I made several successful gybes which was very satisfying.  No tech today - it was nice to be just out there. 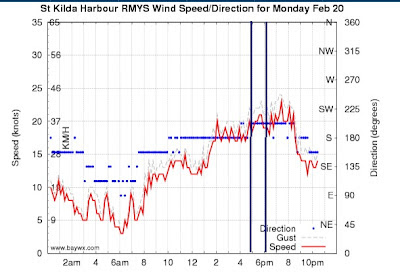