Kitesurfing at Eagle Point Bay on the Gippsland Lakes

We had a family holiday over the long weekend at Marlo, East Gippsland, where we attended the 50th birthday party of Andrew Barnes, and old skiing buddy.  There was a large number of outdoors folks there - it was great to catch up with so many people who are still loving the outdoors.
Alas, there was very little wind, so my plans to kitesurf either the Snow River at Marlo (which was in flood) or the surf near Cape Conran came to nothing.  Mike, a local ranger and friend of Andrew, said the kiting in the Snowy River can be great, and that Point Ricardo is the best beach location in the area.
On the way home, we drove to the Mitchell River "silt jetties" which are an amazing sight.  There was a breeze blowing, but it didn't seem like quite enough for kitesurfing and there was only one narrow grassy launch location.
On the way out out Lena spotted a kite at a location known as "The Old Schoolyard" in Eagle Point Bay.  I drove in there and chatted to Clint Brocchi, a local kiter who gave me some information about the local spot.  The wind was a bit light, but I setup and headed out on my Sector 60.  I got going OK and headed across to the other side. 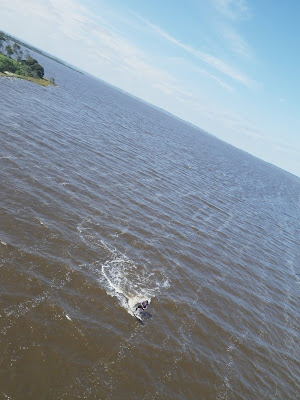 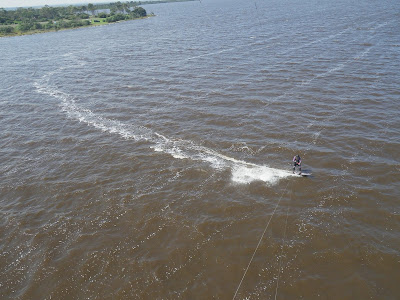 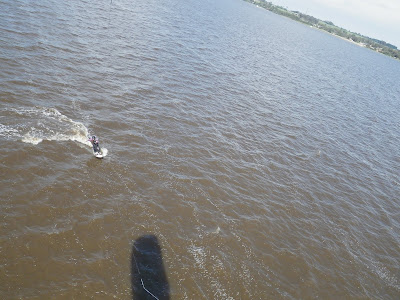 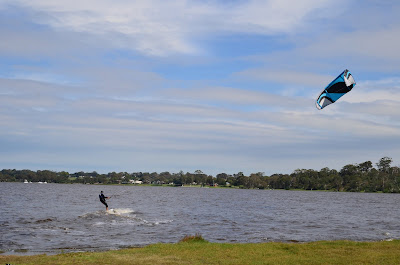 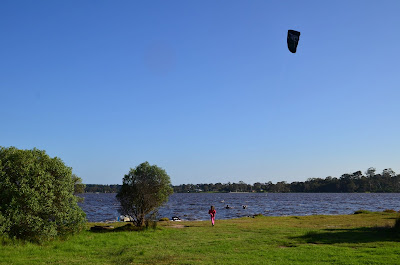 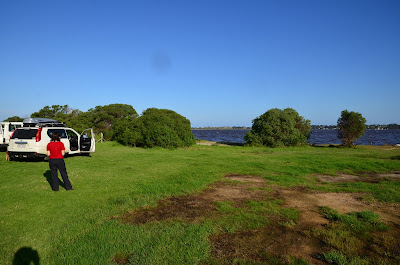 I did a gybe turn, but the wind was lower over the other side and my kite lost power and landed on the water.  I relaunched it once, but couldn't keep it aloft.  Clint came across on his 14m kite and helped me relaunch the kite but I still could keep in flying.  I washed into shore, secured the kite, then started paddling back.  There was a shallow reef close to the shore with some barnacles about, so I cut my feet a few times, but the rest of the Eagle bay has a sandy or muddy bottom.
The Sector 60 was OK to paddle, but the foot straps do get in the way a bit.  About half way across, Clint came back with a rope and towed me most of the way back, for which I was grateful.
Back at the Old Schoolyards after I retrieved the kite, the wind had picked up so I headed out again.  This time it was good.  I managed several right turn gybes and one left turn too.  The water was quite muddy from the floods and freshwater rather than salt.
It was quite a nice spot, but there is potential to get into trouble too, as I found out.
It was really nice to get some advice and assistance from the friendly locals Clint Brocchi and Bruce Bowden.
Session stats
Posted by Peter Campbell at 1:05 pm