Session 222. After no wind last night at St Kilda - when we met to have a debrief for the Across the Bay to Conquer Cancer - a great sea breeze came in late in the afternoon.  I got down to Port Melbourne and was on the water around 6:30.   There used to be only 4 kiters out, but tonight there were about a dozen.  Stuart headed off just as I arrived but Tarren headed out again.

I spent a lot of time in the surf and did a few nice jumps.  Gybes are going well but I am working on doing them quicker. My fins hit sand a few times when I came in too close to shore. I got hoiked by the kite in the shallow water a couple of times.

There were a few swimmers in the water so I slowed right down when I was near them.

I did a couple of longer runs over close to the Spirit of Tasmania and could see the cars and trucks driving onto the ship via the gantry.

The new Garmin 310XT GPS is more convenient than the Edge 705 - its good to see the time when you need to.  I leave my dive watch behind now.

I haven't worked up enough courage to do a backroll with the surfboard, but I was thinking of it during the session.   Backrolls and duck tacks - two things to work on.

Coming back, the Spirit of Tasmania was backing out. I gave it a wide berth. Its a big ship.  I threw in a few downloop turns on the way back to the beach.

Its really nice to get down to the bay with a refreshing sea breeze after a hot day.  Its even nicer to go kitesurfing! 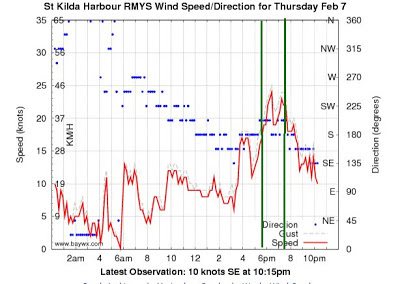