Session 391. A salutary lesson on wind and weather.

There was a strong northerly in the morning followed by a westerly change in the afternoon. Stuart and I, on our traditional annual family weekend with some kitesurfing, checked out Ocean Grove then decided on heading out at Point Lonsdale.

We launched near the surf club in around 30 knots. I set my Union 8 on the low knot (more depower) then headed out into the good sized surf.

I was well powered but not overpowered and caught some good size waves. In the distance some dark clouds were coming. So far so good.

Out to sea about to turn around (gybe) then all hell broke loose. A very strong gust hoiked me along at great speed then into the air. I crashed and lost my board. I body dragged to get back to it as it was close but the wind was too strong and dragged me away.

Then suddenly it got MUCH stronger - up to 55 knots - which was far too much to handle.

I wasn't going to get my board and I was about 300 m off the beach with Rip not far away so I started body dragging to shore. The wind was so strong it was yanking me along very fast, too fast for comfort.

As I approached the shore I was wary of some rock reefs I knew were there. I saw some white water but continued over it, with some rocks visible to my left. If I hit anything body dragging at 15+ km/h I was worried about a serious injury, but I made it to the beach.

I deployed my safety and secured my kite then stashed it just off the beach away from the roaring wind.

I walked back to tell Stuart I was OK- he was happy to see me alive, and had similar problems with the gust but was much closer to shore.

I spend a while looking for my board but I think the westerly would have blown it out into the rip and possibly across to Point Nepean. It could end up on Peninsula surf beaches (or rocks) or get carried into the Bay by the rip.

Very sorry to lose my trusty Nugget, but very happy to retain my life.

I live to kite another day. Stay safe folks. 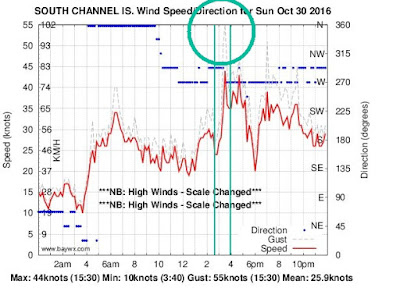 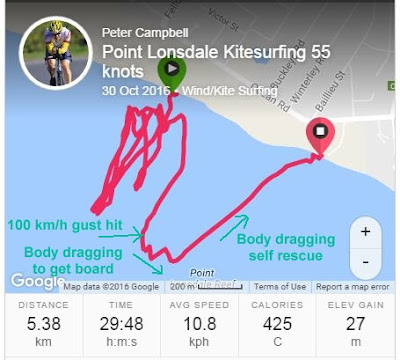 GPS Log
You can see when the 55 knots hit - lost my board, tried to retrieve it body dragging upwind, then bailed and body dragged to shore.
Posted by Peter Campbell at 10:10 pm