Altona in a dramatic storm with some lightning!

Kite: Noise 12
Wind: 19 knots, SE
Location:  Altona
Time: 5:00 to 6:00 (1h)
Board: Naish Haize twintip
I got a familiar rush of blood as I drove along the Altona foreshore and saw about 30 kites out.  Some good wind, hooray!
I rigged up quick and was on the water at about 5pm, no sign of Stuart or Tarren.
I headed south west through the small surf, then cut back into the flat-water lagoon section.  It was nice carving the flat water, but a bit nerve wracking watching out for shallow sections.  The board was snagging sea grass, and I was never quite sure where I would bottom out.  With flat light in the late afternoon it was hard to see where the really shallow parts were.
About ten other kiters were cruising in this section.  I followed some up to the creek inlet, then hit a sandbar and took a tumble, but no damage was done.
I decided to head back out into the surf section, which took a bit of doing, then did a 4km tour up to the Cheetham Salt Works.  There is nothing along this section of shoreline, it feels like wilderness.


Along the way I did a few jumps and attempted some jump transitions without success.  They are harder to do than they appear.
When I eventually turned, I saw an ominous dark storm cloud just north of the CBD, so I headed straight back.  Along the way the bar was well sheeted so I unhooked (for the first time intentionally).  I was able to keep going, but there was a lot of pull on my arms and it was hard to keep the board edged.  I crashed the kite while attempted to re-hook but got it flying again.
I was doing some tacks closer to the shore working my way upwind back to the car when the storm loomed large. I saw some lighting bolts and heavy rain just north of the shoreline, so I headed for shore and landed the kite.  As I did, a very heavy downpour dumped. I could hardly see the kite from 25m away.  Several kiters were still out there somewhere.  I hoped that no lightning would strike them. Luckily, it didn't.
The storm cleared and I walked back along the beach to the car, meeting Stuart and Tarren along the way.  They had arrived just after me.
The storm was dramatic, but the risk of lighting strike was high.
The water seemed quite clean too, which was a relief after the pollution warnings of the previous week. We were all glad to get out after a two week spell with very little wind. 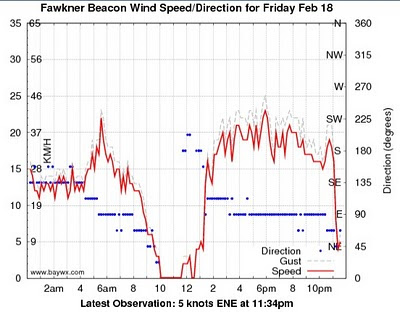