Kitesurfing Hampton in light winds on the Sector 60

Session 273.  There was lighter winds at Hampton in the morning when Stuart and I arrived.  I took out my Sector 60 board and the Lithium 9 to test how this combination would go in lighter wind.  It worked very well.  I had enough power to get some good speed up and could easily go upwind.

I had a phsyio treatment on my back yesterday which improved my movement and reduced the pain a lot so I was intent on not going too hard kitesurfing today.

I was able to ride the swells well between the first and second groyne.  Stuart was finding it difficult to keep upwind on his twin tip and headed down towards Middle Brighton following the waves. I came down into the beach for one run then cranked back upwind to Hampton.  Stuart eventually ran out of wind and walked back some of the distance.

The wind was definitely lighter close to shore so I stayed offshore and kept going well.  The Lithium 9 flew well and generated enough power. I even managed a few jumps.   I downlooped the kite heading in on the swells to get enough forward pull.

No duck tacks today though.

There were other kiters on the beach but nobody else got out while we were there.

The Sector 60 turns a marginal day into a fun one. 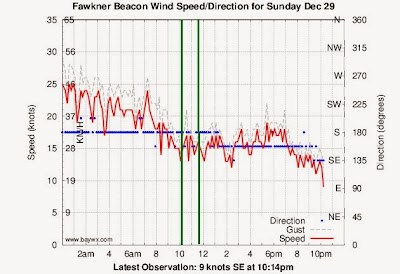