Some good jumps in a new vest at Hampton

Session 71, Tuesday 29 December 2009
Kite: Switchblade 14m
Location: Hampton
Wind: 20 knots S
Duration: 4:30 to 5:30 - 1 hour
Looks like the wind drought is over and the wind god is smiling - for now anyway. A good southerly sprang up in the afternoon so I headed down to Hampton. It is still quiet around town to driving down is very quick.
Impact vest
I stopped at SHQ on the way and bought this vest for protection while jumping. It has good protection on the front, back and sides and is less bulky than the canoeing PFD vest that I used a lot when learning, and for downwinders. 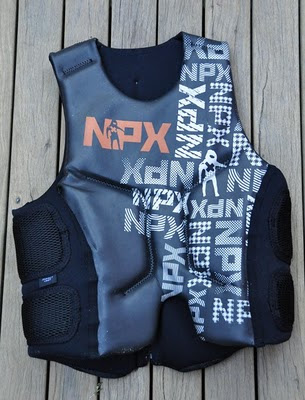 Note: The vest contains a specific warning that it is not an EN393 Bouyancy Device, and that it is not a life jacket. It is not approved by the U.S. Coast Guard of the Canadian Department of Transport or any other agency.
It is designed for tournament water skiers who find PFD jackets too bulky.
A rescue cord
I also tried out a "rescue cord" device I rigged. It is a some venetian blind cord tied to a ring on the harness with a small carabiner on the other end. I tucked it in a neoprene pocket secured on the webbing that attaches the spreader bar. The idea is to use the cord to secure an errant board and tow it, rather than try and scoop it up or do a water launch holding the board, which I have found to be extremely difficult.
Extreme caution must be exercised with a second board in two to prevent it being whip lashed into you if the kite gives you a good yank (the reason why board leashes are strongly discouraged).
It was not a great success as the zip holding the cord worked its way open and the cord then dangled behind trailing in my wake until I stowed it away again.
Today's kiting session.
I took out the Switchblade 10m which was great to fly after so many outings on the 14m. It turns fast and had plenty of power in the 20 knots wind. I did a couple of runs in the flat water behind the sea wall, then some runs out further, landing a few good jumps.
The timing is critical - you need speed, some tension in the lines, then send the kite just before you hit the top of a wave. Then keep the power on and fly the kite back in the direction you are travelling. A few times I have let the kite go too far backwards and "tea bagged" under it, which can result in landing awkwardly on your back. Hence the impact vest.
It worked well - it was comfortable to wear and certainly adds some warmth to the 1mm suit I wear.
After some really fast runs over some big swells, I headed for the surf section between the two groynes, but noticed the board behaving oddly on the right tack. On the beach I discovered that one fin was dangling by a single screw and had rotated around, having lost the other screw. Found just in time.
I had checked the screws a while ago, but one has worked loose since. Tip: check your kit regularly to avoid issues like this. It could be a disaster on a big trip if you didn't have any spares.
I walked back up the beach, had a brief chat to Rick who had just come in from his best ever session. 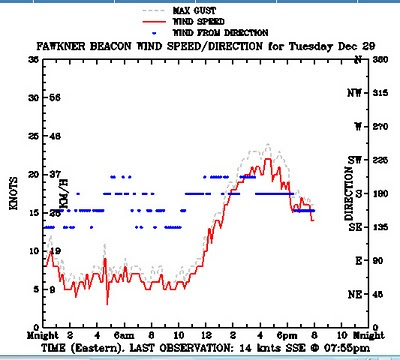 Posted by Peter Campbell at 7:45 pm

Nice vest. Does it make for a good PFD as well as a impact vest?

Here in Ontario Canada they are passing regulations that will require all kitesurfers to wear a PFD. So I am looking for good options to a big bulky boating PFT.

Boris, the vest contains a specific warning that it is not an EN393 Bouyancy Device, and that it is not a life jacket. It is not approved by the U.S. Coast Guard of the Canadian Department of Transport or any other agency.

A regulation requiring kitesurfers to use a PFD would be a big deal. Hardly anybody wears a vest or PFD here in Australia.

Peter thank you for the answer. I am not sure if the laws have been passed yet or if their still in the works. Last time I heard they were going to class kitesurfers as watercraft and therefore it would make it manditory to have a PFD.

I put locktite on all my board screws - I've lost way too many fins. Since using loctite, no problem anymore with screws unscrewing.
Camera is sensational by the way the photos look tremendous.