Chilly and gusty at Brighton

Session 251. A nice afternoon kitesurfing session in chilly conditions at Brighton Beach.  I called by The ZU Boardsports to pickup my new Airush Lithium Zero kite - more on that later.

There were about a dozen kiters out enjoying the punchy wind.  It was about 16-18 knots when I arrived so I took out my Lithium 12.  The bay swell was building and the water was nice and clear.

I did some runs upwind then some downwind slalom turns on the waves.  Nice!

I did some good jumps too and landed most of them.   The wind picked up to 25 knots then I came in, almost overpowered.

Julian was out trying a Lithium 10m kite then he swapped to his North 10m kite.

I had a couple of runs on the North to try it out.  It turned amazingly fast but had surprisingly little power compared to a Lithium. 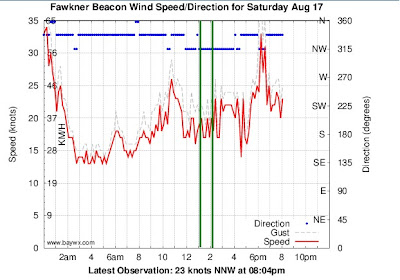 Posted by Peter Campbell at 8:15 pm