Skiing Blånebba - an airy peak in Romsdahl with magnificent views


We met some Swedish skiers on Tuesday who said Blånebba was a good peak to ski.

We drove to the car park at 9:30 up the toll road and headed off, skiing on very wet snow climbing up through small trees. The track was very steep at times and difficult to keep our skins gripping.

Eventually we emerged onto better snow and skied onward and upwards, stopping for snack on a large flat mossy rock.  Dag, a local from nearby Molde caught up to us then skied with us - it was great to have good company and local information on the surrounding peaks.

The skin track got steeper as we approached the ridge. We put on ski crampons which helped a lot. Dag traversed out further to easier ground as he didn't have them.

We re-grouped on the ridge and skied up it to the top for magnificent views, including:
I put our entries in the peak log book then we descended. I skied down the ridge while Dag and Roger descended the first section on foot.  With a big cornice on the right and a sheer drop on the left it was no place for a fall,

We skied down the ridge then dropped onto the face for some nice steep skiing. The snow got progressively wetter and softer.  The last section was a scramble through trees then across a dodgy snow bridge over the creek and back down to the car park,

There were lots of skiers, mainly Norwegians, climbing up as we skied down.

I can highly recommend this ski peak for its challenge and views,

We said farewell to Dag then headed back to Alesund, visiting the spectacular Troll Wall and Troll Road (still closed due to snow) on the way.

The alpine terrain in this region is astounding, 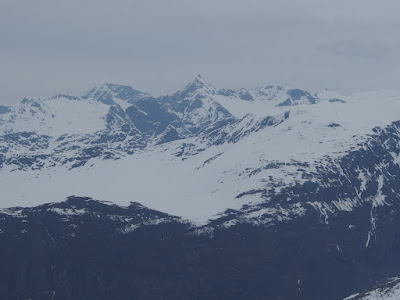 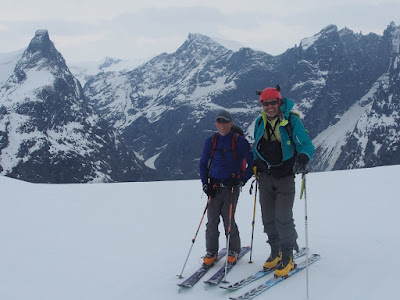 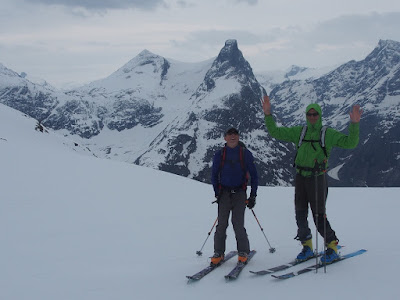 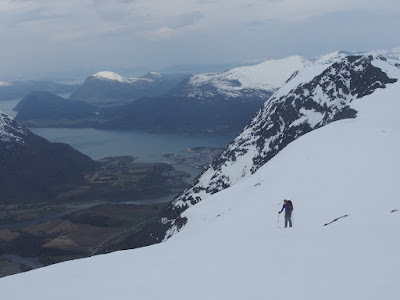 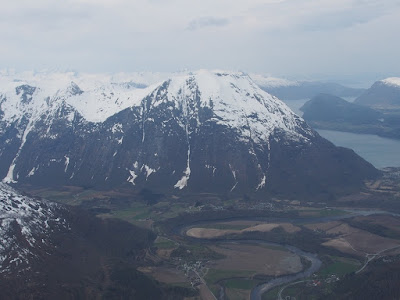 Posted by Peter Campbell at 6:49 am