Kitesurfing with the masses at Rosebud with a wind change

Session 228.  I had a great morning bike ride with Richard at sunrise along the marvellous Cape Patterson-Inverloch road with great views across the ocean.  We discussed where to go during  a nice breakfast at the Beach Box cafe.  Sandy Point was further to go and there was a south-west wind change forecast.  Anderson Inlet was no good with the northerly.  Cowes was too much extra distance.  We decided to head for Rosebud, while Stuart and Tarren ended up going to Seaford (dodging the Iron Man event that was in progress at Frankston.

There were a lot of kites on the grass and the water when we arrived at Rosebud - it looked like St Kilda on a  busy day!  There were about 3 people having lessons right the beach entry point too.

The wind was NW and around 20 knots so I took out the Lithium 12 and my twin tip.  I had to concentrate on edging it and did a few jumps.  Once away from the beach there was plenty of room.  I did a few jumps, then depowered the kite.  The wind picked up more (over 25 knots) so I came in and switched over to the Lithium 9 and my surfboard.

Just as I got to the water the wind dropped then switched to SW (offshore).  I dodged a mess of kites on the beach as I headed out.  Once out I was able to get going well.  It was nice to be on the surfboard again and to fly the smaller nimble kite.


Hutcho, James and Richard all noticed the increase in wind too.

Stuart and Grant scored a couple of runs on their sailboards.


On the way back we stopped at Safety Beach - the SW wind was onshore there and 25+ knots, but there was not a kite in sight.

Stuart and Tarren had Seaford to themselves and also scored to good sessions there.

We headed home, with everyone happy to get some kiting on both days of the Blokes Kitesurfing Weekend. 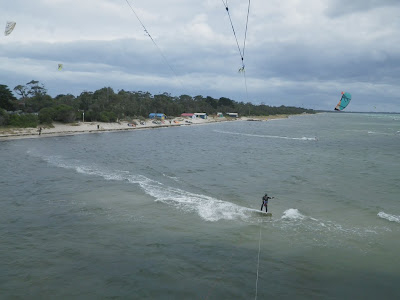 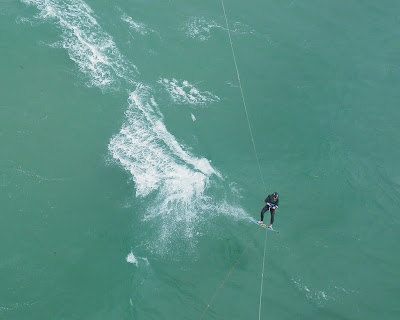 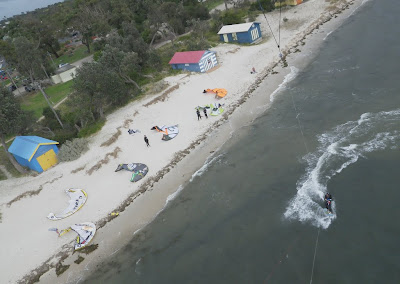 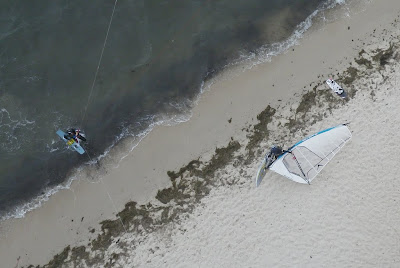 Posted by Peter Campbell at 8:44 pm

Cool - you can really see the wind change on the GPS log!

Yes, the wind change to SW (offshore) was quite dramatic - I was the only one on the water for 15 minutes, when there were around 20+ kiters out before!