Melbourne's heat wave in March - that is on track to be the hottest ever  - has mostly shutdown our kitesurfing winds.

We are in the middle of a heatwave and it looks like we will have and all time record of 10 days of 32C or more during March.

The heatwave has been caused by a "blocking" high pressure system over the Tasman Sea, which steers hot continental winds from Central Australia down over south-eastern Australia.

The resulting temperatures are illustrated it the chart from the Bureau of Meteorology below. 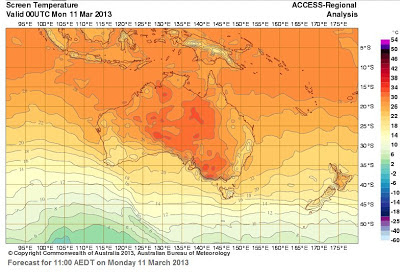 The northerly winds from this weather pattern are strong enough to even damp down the normal sea breeze that Melbourne gets during the late afternoon, when cooler air normally moves from the sea to inland.

However, I am still resting my left elbow which has an overuse injury due to the huge amount of kitesurfing I did over January and February, so its not a big problem for me - apart from the heat that is.

Posted by Peter Campbell at 3:37 pm