Short kitesurfing session on the Sector 60 at Hampton

Session 229.  I got down to Hampton at around 8 a.m. to catch the forecast westerly. It was cold and wintry. Stu Styles met me there but elected not to go out in the light onshore wind of around 15 knots, which was the right decision for him.

I setup the Lithium 12 and had a go with the Sector 60.  I struggled initially to get going, the wind seemed to have dropped further, but once up with some fast kite flying I was able to get going and go upwind.  There wasn't enough wind to do gybes however so I stopped and switched.

I got back in to the beach and did few more tacks, eventually getting some longer runs back to the breakwater.  There was less wind in close to shore however. On my last run it had dropped further so I cranked up maximum speed and headed back in.  I made it without too much trouble, but right at the end the wind must have been less than 8 knots.

It was nice have a run on the Sector 60 with no other kiters about and lots of joggers, cyclists and walkers along the foreshore.  My elbow is still sore on the "top of the bony bit" (ligament / sheath?) but the muscles and tendons feel better now.

The wind picked up briefly to around 20 knots when I was driving home but it didn't stay there for long.  The equinox was on 20 March so we are now headed into some more usual Autumn weather after all the recent hot days. 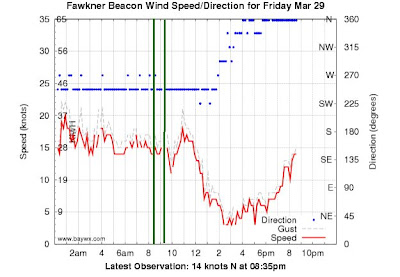 Posted by Peter Campbell at 9:01 pm