Another great sea breeze came in.  I started kiting at about 4:30pm from Albert Park beach.  There was a windsurfer out having fun.  After a short tack I followed him all the way over towards Sandridge Beach.  He went into the beach.

I did a couple of tacks then crossed the channel to Williamstown.  There were no big ships about.  I got a little bit of flat water near the Newport power station, then tacked in towards the Strand, wary of running out of wind.

The wind got a bit fickle so I scooted back across the channel, only to be greeted by a large Toll ANL Bass Strait ship departing from its dock.  Rather than cut across the bow, I tacked a couple of times and crossed behind it, finding a big windshadow in its lee.  I only just kept the kite flying, then got going again as the sea breeze kicked in again.

I did a very long tack to St Kilda and got into the kiddies pool.  From the open bay to Bourke St!  It was quite busy.  After a couple of runs I headed back towards Port Melbourne in search of Stuart and Tarren.  There were some big "Bay city rollers" to cruise down, and enough wind for a few jumps.

I came right into to Port Melbourne beach next to the Spirit of Tasmania and did few runs in the surf before heading back to Albert Park.  I mis judged the distance from the fishermen on the pier and snagged a line.  I stopped and kicked off my board to free it - with an irate fisherman yelling at me.  Lesson: go TWICE as far out as you think you need to when passing fishing lines in the water.

There was a better surf off Albert Park so I did several runs there and found Stuart and Tarren having a ball too.  I stopped after about 2 hours, feeling rather tired, but very happy.

The GPS log worked well, but the Contour Roam camera again malfunctioned - it was turned on in the case then apparently turned off when I went kiting - then back on when I returned.  The magnetic switch seems to be very erratic.  Bugger!  No photos of my tour!  Must double check the record light in future. 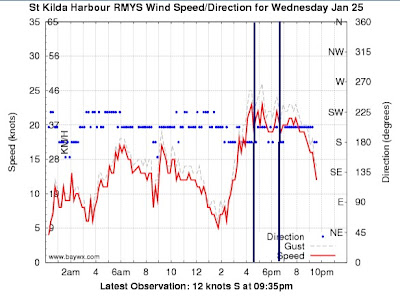 Posted by Peter Campbell at 9:53 pm