Session 163, 15 January 2012
We finally did it!  After a couple of years speculating today was the day we made it across the bay!

We kited and Hampton for a while in a good consistent southerly.  We got some nice runs up to and behind the breakwater.  Several sail and motor boats were coming into the marina so some caution was in order.

I took off past a large launch just dowwind of it.  It then sped up and past me, even though I was hooting.  I slipped into its wake, which was quite smooth and gave chase.  I was gaining on the boat for a while and cloced 48km/h before pulling off its wake.

I then did a run out to have a look past Green Point.  Stuart was with me.  We kept going.  And going.

A container ship headed down the shipping channel towards Port Melbourne, some distance away.  We got over the wake easily, then crossed the channel well behind the ship.  It was fast and not too tiring on the tack.  Tarren came up behind and joined us.  We kept going.

Not much happening out there other than some big bay swells.  Then we got close to some land, uncertain about where we would make landfall.  We came to shore south of Altona Beach with kites visible there in the distance.  It was great to make it.

After a short rest we headed back.  My left thigh was burning almost straight away so I was wondering if I would make it.  I stretched the legs out and tried to keep them straight, which fixed the problem.  It was a long way back to the channel but the wind kept blowing.  The Spirit of Tasmania headed out down the channel well in front of us.

I got into a zone and just kept going.  As fatigue set in I rested my arms and hands, moved me feet around and stretched my legs.  The Red Bluff was visible as a landmark, and the Sandringham Marina next to it so we headed there.  We came right back in to Hampton, tired but ecstatic.  An epic journey was over.


Summary
Details
Timing
Note the max speed is wrong - the fastest I have on the time log is 43.3 km/h - most likely when I was chasing the motor launch.

The crossing distance is around 17km as the crow flies. 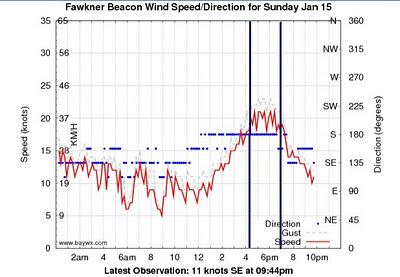 The wind was around 20 knots and a southerly.  We were lucky with the wind window - it dropped soon after we got back.

From the track log, I estimate the time from Hampton to Altona was 40 minutes, the return trip took 43.  It is remarkable how close the out and back tracks are.  Its a long way to go on one tack, but it was certainly worth it.
Posted by Peter Campbell at 12:15 am

Hey Pete, I'm guessing it got too late to put the photos up. Hope the camera worked. I certainly feel worked over this morning !

Stuart, the camera was not taking shots :-(. I definately turned it on when I put it in the case so I don't know what happened. Wierd, given their is only one switch! Bugs in the system . . .