Session 206. Got down to Hampton just before 5pm. Lena and Chloe headed up the beach to make some sandcastles while I setup my Lithium 12.  I was keen to try it out in some stronger wind so the 20 knot sea breeze was good for that.

The kite handled the wind well, I didn't need to depower it.  I did a run back to the beach then headed out again and did some slalom turns back to the Middle Brighton beach.  I joined several kiters who were enjoying the small surf along the beach and at Green Point, including Franz du Plessis.

It was a nice coming in from Green Point and picking a wave to ride and parking the kite. The waves break over the small reefs. Riding toeside is now quite straight forward and turning among the waves is great fun.  After the run into the beach a short tack upwind takes you back out past Green Point ready for another run in.

I tried my new shorty wetsuit - it was great.  It has more freedom than a steamer and better than the wetsuit shorts and top combination I have been using recently as the shorts fill up when I body drag after a crash. 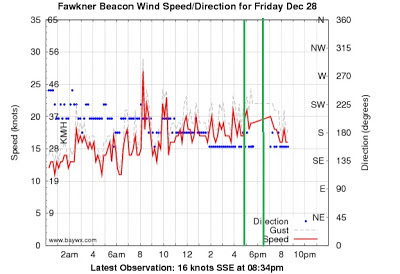 After the waves I kited back upwind to Hampton. A really nice session with lots of variety - downwind run, slalom turns, gybes on the surfboard, small surf action, a couple of small jumps, then upwind to finish.

Posted by Peter Campbell at 9:05 pm