Some unexpected wind sprang up around midday so we headed down to Hampton and got there at  about 1:35, just in time for the 20 knot wind to drop to less than 15.  I rigged my kite and flew it on the beach for a while chatting to Stu Styles, who is keen to start kiting to supplement his great passion for windsurfing.

Its amazing how 12 knots feels like 18 when you get going on the Sector 60.  I attempted a Duck Tack (sort of) but still find it quite difficult to visualise how to to do it.

I worked my way upwind, then the wind picked up to 15+ so I was going well.  It was nice touring up to Black Rock up past the Cerberus. I was intending to keep going to Rickett Point, but I noticed one of my large fins was coming lose - I didn't do the screws up tight enough.  They are impossible to tighten without a screw driver so I headed back directly to Hampton, keeping my fingers crossed that the fin wouldn't come out.

It was a blast going downwind.  This time I flew the kite right around to the other side - the key is to keep it turning to it comes back and keeps generating power.  I did a few downwind kiteloops that were easy and provided some extra boost.  Some large yachts were racing just off the breakwater so I threaded my way through them carefully and fanged in to the beach.

The fin was still there, but only just.  Memo to self: do the fin screws up tight!

Looking at another kiter's Sector 60 V3 after the session I noticed they have two large surface mounted screws for each front (large) fin, which is a much more secure fixing that the single screw on mine.  He said it doesn't carve turns as easily as the V2 - which is the opposite of what the information from Airush indicates.

I had a short rest on the beach after I tightened the screws.  A kid flying a stunt kite crashed it hard millimeters from my kite - if he had hit it there would have been some serious damage, but luckily he just missed.

I did another couple of runs and was finding it hard to make the gybe turns in the lighter wind.

A did a total distance of 26km but it felt like more.  Its good training for Across the Bay to Conquer Cancer fundraising event I am participating in around Australia Day 2013. 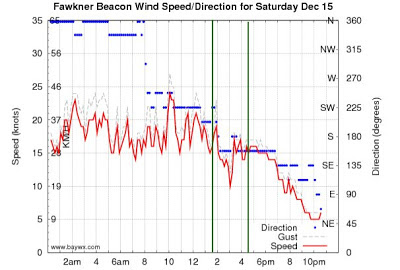