Session 217.  We did a training downwinder from Rye to Aspendale today in preparation for the Across the Bay to Conquer Cancer event next weekend.  11 kiters participated, along with family, friends and supporters. We had one boat too.

We got down to Rosebud at 1:00pm but the wind was quite light. After some lunch I scored the task of being the "wind test dummy". I got my gear on, flew my kite, then headed down to the water with the Sector 60 board. It was a bit dicey getting out - there was some wind but there holes in it.

After a long walk out through the shallow water, I got up and going - just.  The wind coming off the land was unpredictable. Its unusual to have the normal wind direction inverted (offshore).  I did a couple of runs then headed out further, then the wind conked out and my kite landed on the water. I relaunched it after a while, got going a few times, but crashed it again.  This was a very frustrating period, but I figured those on the beach could at least see it what the conditions were like - i.e. not good!

Cesar swam out and helped relaunch my kite on one occasion.

The boat came out to watch me. I spoke to them on my marine VHF handheld and informed them that the wind conditions were not good.   It was handy having the radio as I could communicate with both the boat and the Coastguard, but I had to stop to operate it.

I decided to go downwind as best I could and head towards Dromana, figuring that was better than nothing.  Along the way another kiter (another Peter) caught up to me.  He as doing a great job getting along on a twin tip and handling the light wind.  With a companion, it was time to get moving.  The wind picked up, so we headed towards Mt Martha.

It was a great relief to have some power and get going after all the schlogging!

At around Mount Martha we were on a tack that could have taken us directly to Port Melbourne, with the tops of Melbourne's tall buildings visible over the horizon.  We came in closer to shore near Sunnyside Beach then headed out.  We made good progress, cruising past the rocky headlands and occasional beaches, past Mornington (the harbour was a good landmark) then Frankston was visible in the distance.

We were cruising on a good swell and surfing the bigger waves in a fashion. I did some downloop turns to keep the speed up and have a bit of fun.  I was able to crank up some good speed.  It's amazing how much ground you can cover when there is wind.

I had a drink and some energy gel just before we got to Frankston.   The wind was getting better as we got closer.

With some relief we cruised into Gnotuk Ave beach at Aspendale and met Wayne and Franz on the beach - they have driven back from Frankston judging the wind to be too light.   I contacted the boat to find out how things were going. Natalie had stopped at a beach and headed home.  Tim copped a big lull behind us and was picked up by the boat.  Cesar was on the beach at Dromana for a while then restarted when the wind picked up - he made to Aspendale too.

I was quite tired but didn't get any cramps.

Its going to be a challenge to keep track of 25 riders on the day of the Bay Crossing!  Communications is going to very important.  Its best if we travel in groups, but its not always easy to achieve this, and the launch could be very tricky depending on the wind direction and strength.

I will sleep well tonight. 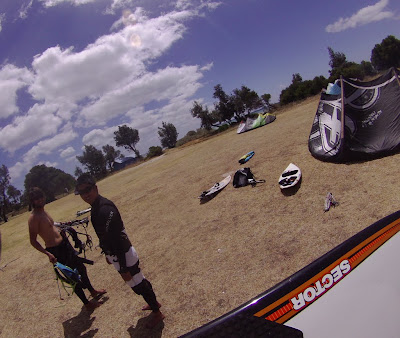 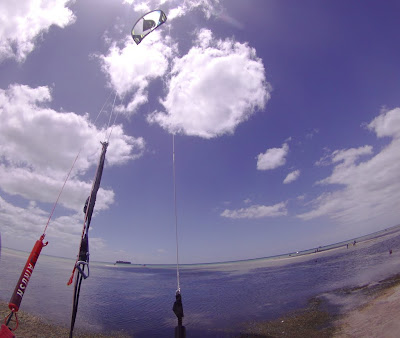 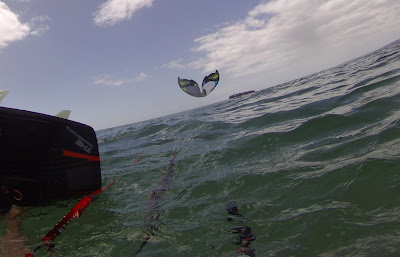 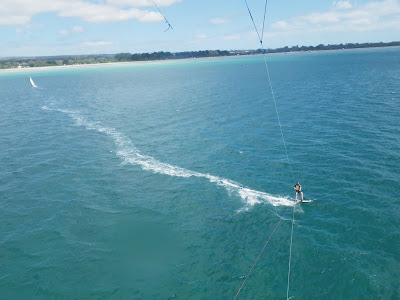 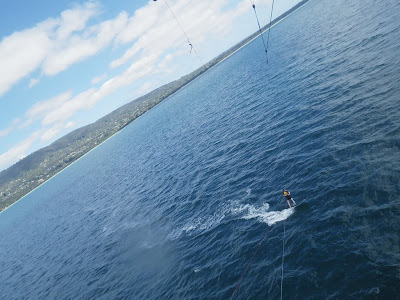 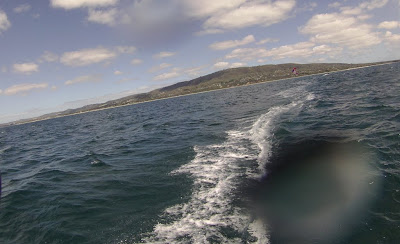 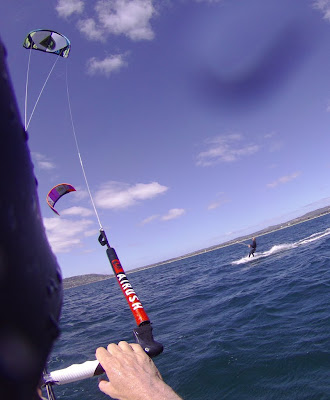 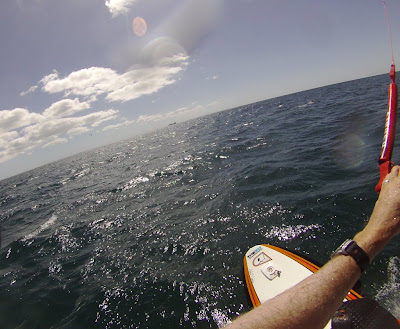 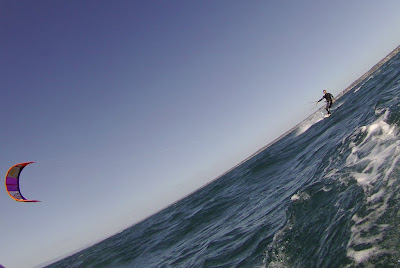 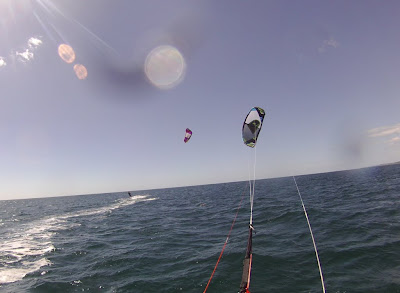 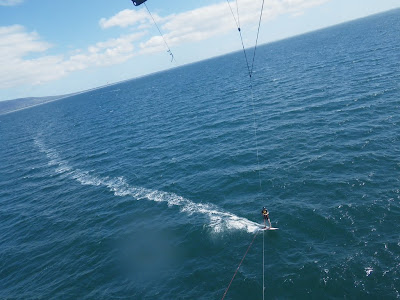 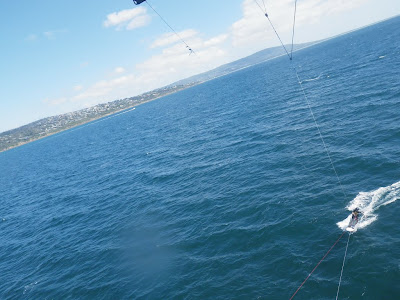 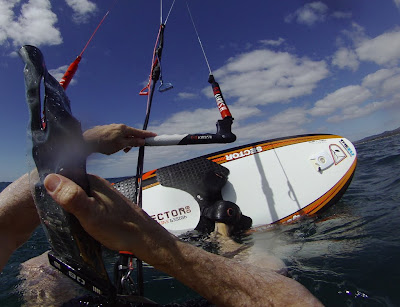 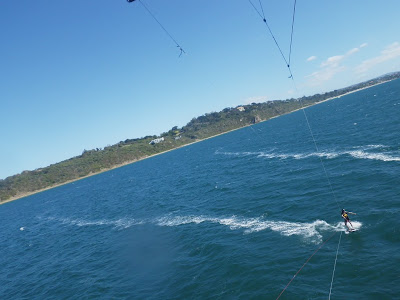 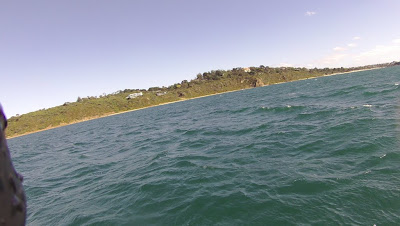 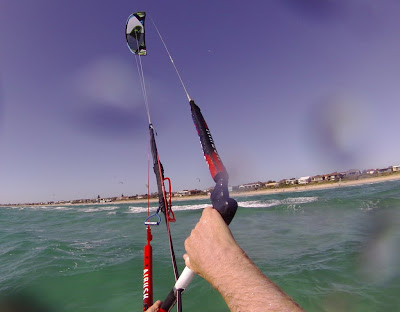 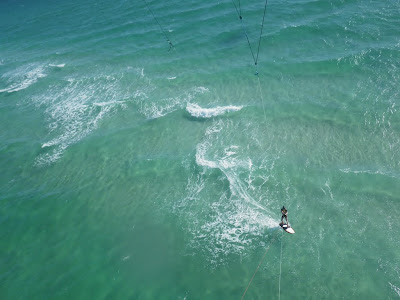 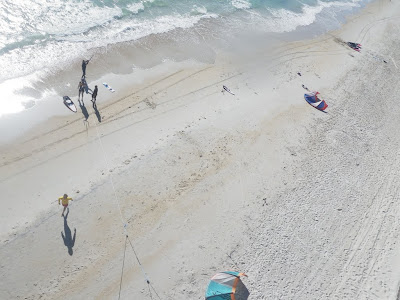 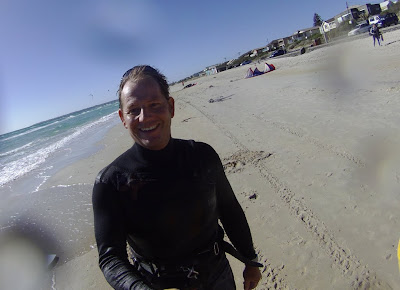 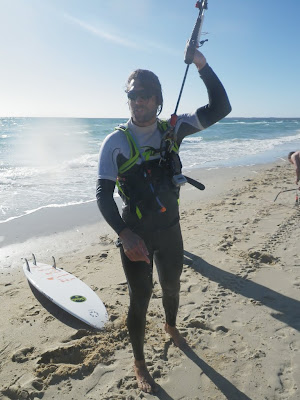 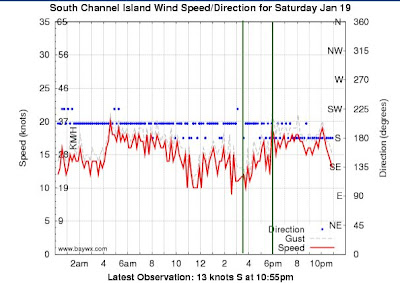