Session 211.   More good wind!  I headed out from Port Melbourne at around 6pm just at Tarren and Stuart had come in. I took out my 10 as it was blowing around 20 knots with more on the way - 30 at South Channel.  At first I was missing the grunt of my Lithium 12 but then the wind picked up and I had plenty of power.

I tacked out past the Spirit of Tasmania then across to the Albert Park beach for some nice bay surf wave action.  I did a few nice jumps on the way there. There were some nice sets coming in. Whizzing along in the small surf is a buzz, and riding the odd wave is even better!  I just loving the surfboard now.

Then I tacked out some more and got up to St Kilda - my first time there this season.  A few kites out but not too many.  I did a couple of runs into the beach and then headed back out past the breakwater and a few yachts that were coming in.  I did one big jump where the kite headed too far back and kicked the board right off so I would land feet first rather than flat on the board.

Getting onto the big rolling swell was great.  Downloop turns keep the board speed up - I have really got them dialed in now.  Downloop for a right turn, followed by a downloop for the left and the lines don't twist. Wonderful!

You can see my downwind/slalom trail on the track log heading back (out further).  As I neared the Spirit of Tasmania it was pulling away from its berth, so I kept well away from it.  A few more jumps and slalom turns and I was on the beach.

This was a really good session - lots of variety and good wind! 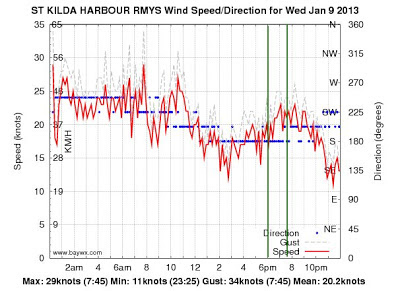