Kitesurfing tour Mentone to Chelsea and a seal

Session 207. Another sea breeze!  Headed off from Mentone at about 5pm in 20+ knot sea  breeze. Took the Sector 60 and the Lithium 12 to do a short tour and get some practice for the Across the Bay tour.  I did one short tack off Mentone then made it past Mordialloc pier on the next tack!

A couple of tacks later and I made it to Gnotuk Ave. The wind got stronger and I fully depowered the kite - it has a good depower range. I kept going upwind and go to just past Chelsea.  Turning in the bay surf was tricky at times.  There were a few kiters out all along the coast, including Mentone, Mordialloc, Aspendale and Gnotuk Ave. Most were on surfboards enjoying the bay surf.

The return run was great. I followed the line of bay surf. At one stage I was tracking next to a seal that was bodysurfing the waves too. He was having a ball.

I was able to gybe the board at speed a couple of times and ride toe side for a bit.  The bay surf was suprisingly big in some spots, including close to Mordialloc pier.  I did a couple of succesful pre-turn gybes turning left.

Upwind past the pier then full bore downwind back to Mentone with lots of speed.  No GPS or camera today, but the distance I kited was around 27km.

Here is the route


View Mentone to Chelsea kitesurfing in a larger map 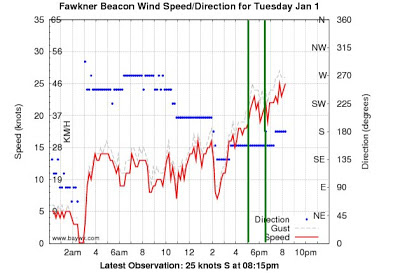 Shame there's no photos of the surfing seal!